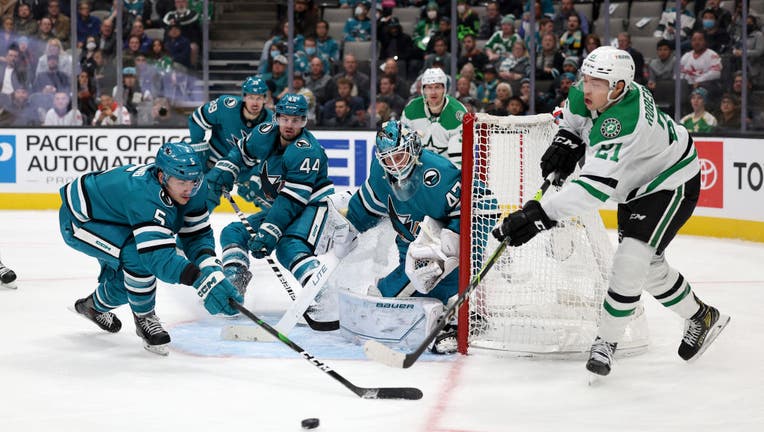 SAN JOSE, CALIFORNIA - JANUARY 18: Matt Benning #5 and James Reimer #47 of the San Jose Sharks stop Jason Robertson #21 of the Dallas Stars from scoring in the third period at SAP Center on January 18, 2023 in San Jose, California. (Photo by Ezra Sha

SAN JOSE, Calif. - Erik Karlsson had a goal and three assists to reach 60 points this season, and the San Jose Sharks rallied past the Dallas Stars 5-3 on Wednesday night.

San Jose stormed back from 3-0 down in the second period with goals from Steven Lorentz, Nick Bonino and Timo Meier. Logan Couture also scored for the Sharks, and James Reimer made 32 saves in his 200th career win.

"Honestly, I’d forgotten about it," Reimer said. "I forgot about it for probably a week and a half or however long it was, and then someone reminded me, and then it’s kind of stuck in your head for a bit. ... But honestly, I had lost a few in a row, and I was just more interested in getting the win to right the ship a bit. But it’s nice to get it."

"I don’t know if there’s any turning point. I think (our) power play had a little bit of trouble tonight," Stars defenseman Colin Miller said. "They capitalized on theirs, so you know, just got to be sure for tomorrow."

Karlsson scored the go-ahead goal at 10:41 of the third period as he took a pass from Bonino and beat Oettinger for his 15th of the season.

"When you get deep in the season, it’s easy to kind of look at the situation and just quit, and we have done anything but that. I’ve said this all along: I love coaching our group. It’s a great group to coach," Sharks coach David Quinn said. "They come to work every day. They bounce back after tough nights, which we’ve done. And I just can’t say enough about our group. I’m really happy for them."

In the second period, the Sharks scored three times in 5:37 to tie it 3-all. The Stars had taken a 3-0 lead after goals from Faksa and Robertson earlier in the period.

"I think us on the road with a 3-0 lead, I mean, we’ve got to close that out," Dallas coach Pete DeBoer said. "But that’s on us. It’s not about scoring another goal. It’s about, you know, not handing them any."

Meier scored his 26th of the season on the power play after San Jose held the puck in the offensive zone for the entire man advantage.

"It’s going to be a while until we come back here, so it was good. We enjoy playing here," Karlsson said. "I know our record hasn’t really shown that, but this is a great building to play in."

Couture added an empty netter with 35 seconds left to ice it.

With 30 goals through 46 games this season, Robertson became the fastest Stars player to reach the mark since the club relocated to Dallas. The previous record was held by Mike Modano, who needed 48 games in 1993-94.

The Sharks made a minor deal earlier in the day, acquiring forward Kyle Criscuolo from Detroit for forward Jasper Weatherby. Criscuolo has five goals and five assists in 27 games with Grand Rapids of the American Hockey League. He has two career assists in 15 games of NHL experience for Buffalo and Detroit.

Stars: Play the Kings in Los Angeles on Thursday.

Sharks: Face the Blue Jackets in Columbus on Saturday.