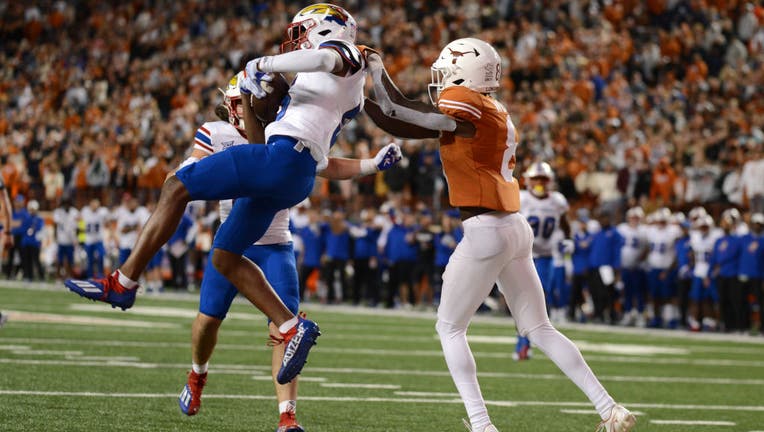 AUSTIN, Texas (AP) - Everything was going against Kansas late. The momentum. The crowd. The score.

And then first-year Jayhawks coach Lance Leipold decided go for the win and got it.

Jalon Daniels hit Jared Casey on a scrambling pass for a 2-point conversion in overtime and Kansas stunned Texas 57-56 Saturday night to snap the Jayhawks' eight game losing streak this season and a 56-game losing streak in Big 12 road contests that stretched back to 2008.

"It really says a lot about the young men we have in the locker room," Leipold said. "They've been starving. It's one win. We have to build on it."

Leipold knew he had nothing to lose on the conversion attempt. Lose the game? So what? Leipold is trying to rebuild the worst program in the Big 12.

But make it and beat Texas — even a struggling Longhorns program now mired in its worst losing streak in more than 60 years — and Kansas (2-8, 1-6 Big 12) could grab college football's attention with a stunner.

It worked to perfection after the Jayhawks nearly let it slip away.

Texas had rallied from 21 down in the second half to force overtime on Casey Thompson's touchdown pass to Cade Brewer with 22 seconds left.

Texas got the ball first in overtime and scored on Marcus Washington's scoop-and-stretch touchdown catch. But an unsportsmanlike conduct penalty set up Kansas with a short field and the the Jayhawks answered with Devin Neal's 2-yard touchdown run.

Leipold never hesitated on the decision to go for the win. Kansas players stormed onto the field when Daniels found Casey trailing the scrambling quarterback across the middle of the field and the fullback cradled the throw for the score.

"I didn't actually see the catch ... But I saw everybody running toward them, so I made my way toward them too and jumped into the dogpile," Neal said. "It was just truly remarkable."

Casey, a walk on, hadn't caught a pass this season until that play.

"He's got one of the best hands on the team," Daniels said. "I've seen him make some miraculous catches with just one hand. Walk-on or not, he's going to be a ball player when it counts."

While Kansas players ran around the field, one Texas player sat near the goal line and pounded the turf with his helmet in frustration.

Texas (4-6, 2-5) started 4-1 under first-year coach Steve Sarkisian, but has now lost five in a row for the first time since 1956. Texas must win its final two games to become bowl eligible.

"Until we figure that out, that it takes discipline, commitment, toughness and accountability all of the time, we’re going to be swimming upstream," Sarkisian said. "That’s the message to the guys. At some point they’ve got to recognize that."

Thompson finished with 358 yards passing with six touchdowns for the Longhorns.

Kansas: Kansas was outgained offensively 420 yards to 574, but scored 21 points off turnovers in the first half. Sacks of Thompson and Hudson Card forced fumbles. Jacobee Bryant returned an interception for a touchdown late just before halftime that made it 35-14.

Texas: It's a devastating loss for a program that started the season ranked but has hit utter collapse. Instead of surrendering a second-half lead this week, the Longhorns never led in this one. Making things worse: standout running back Bijan Robinson left the game in the third quarter with an apparent arm or shoulder injury.

Sarkisian was asked if his players have checked out on the season.

"I don't know. You'd have to ask them," Sarkisian said.

Texas receiver Xavier Worthy has emerged as the key play maker for the Longhorns. His three touchdowns give him a school record 11 this season, breaking the old mark of eight set by Roy Williams in 2000.

Kansas plays at TCU next Saturday