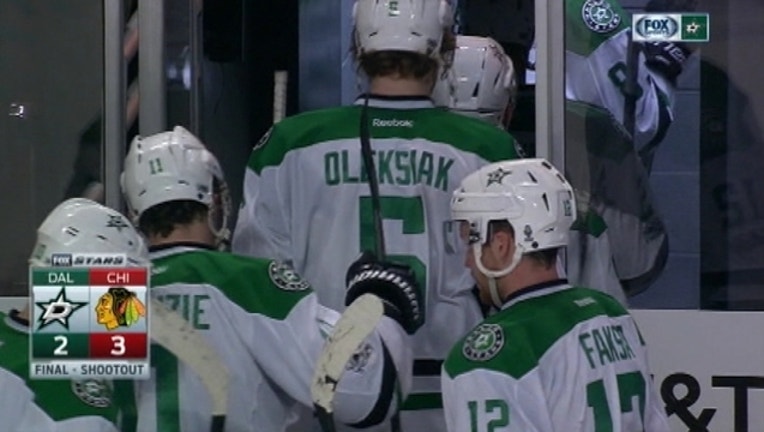 CHICAGO (AP) - The Blackhawks weren't at their best, but marquee players came through -again - to keep Western Conference-leading Chicago on a roll.

Patrick Kane scored his team-leading 33rd goal in regulation and connected again in the shootout as the Blackhawks beat the Dallas Stars 3-2 on Thursday night to open an eight-point lead for first place in the Central Division.

Artemi Panarin also scored in the shootout as Chicago rode a 42-save effort by Corey Crawford through overtime to improve to 6-0-1 in its last seven. It was also the Blackhawks' 18th win in their last 22 games. Marian Hossa scored his 24th goal of the season midway through the third period.

"We didn't have the best game and Corey was strong for us there," Hossa said. "He made some huge saves, especially in the shootouts, too. Two nice points."

Kane agreed that Crawford, who reached 30 wins for the sixth time in his career, was the difference.

"He played amazing tonight." Kane said. "The reason we won the game.

"Hats off to him. He's done that a lot this year."

Crawford was beaten only by Tyler Seguin in the shootout and twice in regulation by Ales Hemsky as he matched his season high for saves. The All-Star goalie rebounded smartly from giving up four goals on 10 shots to Vancouver on Tuesday night.

The Blackhawks have been spotty in their last three games, all at home, despite going 2-0-1. Chicago needed big third period rallies in their previous two contests to earn points, then leaned on Crawford in this one.

"Games like tonight you can't be too happy with what you saw," coach Joel Quenneville said. "We want to make sure there's more attention to detail and pace to our game."

Dallas' Kari Lehtonen made 24 saves through overtime, following up on a 30-save shutout on Monday against San Jose.

Hemsky's second goal of the game with 5:09 left in the third tied it at 2 and sent it to overtime. From the left side of the crease, Hemsky buried a rebound of Esa Lindell's shot from the right point.

Coach Lindy Ruff thought the Stars, all but eliminated from playoff contention, should have had more on the board before the extra period.

"You've got to give Crawford some credit on the saves," Ruff said. "But, at the same time, we missed some beauties. You know, we probably doubled them up 2-1 in chances.

Hemsky connected for his second goal and third goals this season in his 10th game back following hip surgery.

"We finally feel like a team and if we can play like that, we can play with anybody," Hemksy said. "We just didn't score."

Kane opened the scoring with a power-play goal at 8:13 of the first. He moved in on a 2-on-1 break with Richard Panik, then beat Lehtonen on the stick side.

Crawford was sharp as the Stars started piling on shots. That including a point-blank pad save on Jiri Hudler's backhander at 9:42.

Hemsky tied it at 1 at 12:26 of the second on a 40-foot shot from the slot that may have been screened by Blackhawks defenseman Niklas Hjalmarsson. Hemsky beat Crawford high on the stick side after taking John Klingberg's feed from the right boards.

Hossa fired a quick wrist shot from 30 feet out in the slot, through a screen and past Lehtonen to put Chicago ahead 2-1 at 8:37 of the third. Hossa was set up by rookie Nick Schmaltz, who passed from just inside the Dallas blue line on the left boards.

Kane fired a shot off the post during a power play 26 seconds into overtime.

Later in the extra period, Crawford stopped two in-close chances by Jamie Benn from the right edge of the crease. He then came up with a pad save on Remi Elie's breakaway with 1:15 left in overtime.

NOTES: Crawford (30-15-3) reached 30 wins for the sixth time in his career. . Stars C Jason Spezza missed his second game with back spasms. ... Chicago C Artem Anisimov sat out his fifth game with a lower-body injury. ... Earlier on Thursday the Blackhawks gave utility F Tanner Kero a contract extension that runs through 2018-19. The 24-year-old Kero, signed as a free agent in April 2015, is one of seven rookies to skate with Chicago this season, and has five goals and seven assists in 38 games since his recall from the AHL. ... The Blackhawks honored Hall of Fame G Ed Belfour in a brief "One More Shift" ceremony before the game. Dressed in his Blackhawks gear, Belfour skated onto the ice and joined the team for the national anthem. Belfour began his career with Chicago, where earned his first 201 of 484 career wins over seven seasons. He went on to play for the Stars and led them to their only Stanley Cup in 1999.

Stars: Host Pacific Division leader San Jose in Dallas on Friday night, and for the second time this week. The Stars beat the Sharks 1-0 in Dallas on Monday.

Blackhawks: At Florida on Saturday night to start a three-game trip. Chicago plays six of its last eight regular-season games on the road.