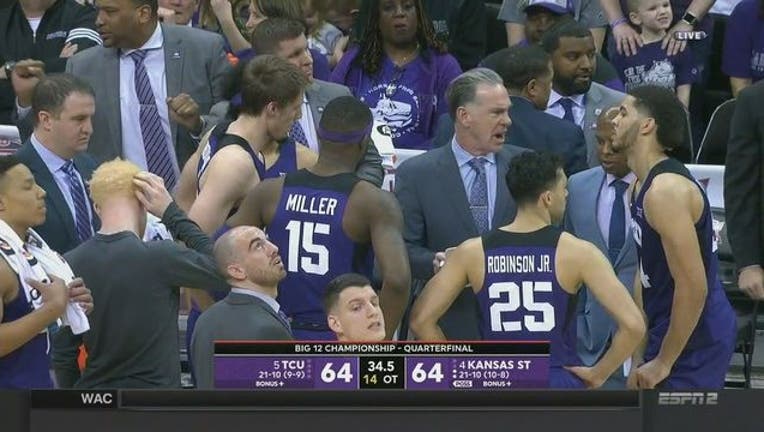 KANSAS CITY, Mo. (AP) - Kansas State's Barry Brown scored the go-ahead layup with 11.2 seconds left in overtime, and Alex Robinson missed a pair of foul shots at the other end for TCU, allowing the Wildcats to escape with a 66-64 victory in the Big 12 Tournament quarterfinals on Thursday.

The Horned Frogs, who forced OT on Desmond Bane's buzzer-beating 3-pointer, had the ball with the game tied at 64 and 34.5 seconds to go. But when Robinson's pass was deflected out of bounds, a video review showed TCU's Vladimir Brodziansky touched it last and Kansas State was given the ball.

Brown was fouled while converting a driving layup, but he missed the free throw.

At the other end, Robinson drove down the right side of the lane and was fouled by Makol Mawien with 1.3 seconds left. But the 60-percent foul shooter missed the first of two free throws, forcing him to miss the second, and the Wildcats corralled the rebound to seal the win.

Mawien finished with 16 points, and Xavier Sneed and Dean Wade scored 12 apiece for the fourth-seeded Wildcats (22-10), who advanced to play Kansas or Oklahoma State in Friday night's semifinals.

Kenrich Williams led the Horned Frogs (21-11) with 20 points. Robinson contributed 16 points on 6-for-15 shooting, and he finished with seven turnovers - none more costly than the last.

The teams couldn't have played a more even first half, swapping the lead seven times with seven ties and ending 30-all at the break. Both were 2 of 8 from beyond the arc, the Wildcats shot 48 percent from the field and the Horned Frogs shot 52, and neither team made a free throw.

Hardly a surprise, given the teams split in the regular-season with each winning at home.

TCU finally put together the first big run in the opening minutes of the second half. Robinson started it with a free throw and ended it with a jumper, and Williams added five points during the 11-0 spurt, which gave the Horned Frogs a 43-34 lead with 14½ minutes to go.

Kansas State clawed right back thanks to a series of Horned Frogs miscues. At one point, Robinson turned it over three times in a span of four possessions, then blew a wide open layup in transition.

Cartier Diarra scored at the other end for Kansas State, knotting the game 53-all.

Kansas State kept the momentum going, edging ahead 59-56 when the Horned Frogs' J.D. Miller was called for basket interference with 52.3 seconds left. But after Williams missed at the other end for TCU, coach Jamie Dixon elected to play defense rather than foul the Wildcats.

Brown's long 3-pointer missed with eight seconds left, and that gave Bane enough time - by a fraction of a second - to hit his only basket of the game and force overtime.

TCU had never lost to the Wildcats in the postseason, beating them in the NCAA, NIT and Big 12 tournaments over the years. It also ended a streak of three straight conference tournaments in which the Horned Frogs had won at least one game.

Kansas State won four of six to finish the regular season, and now should feel comfortable about an at-large bid for the NCAA Tournament despite its pillow-soft non-conference schedule.

TCU heads back to Fort Worth, Texas, to wait out Selection Sunday.