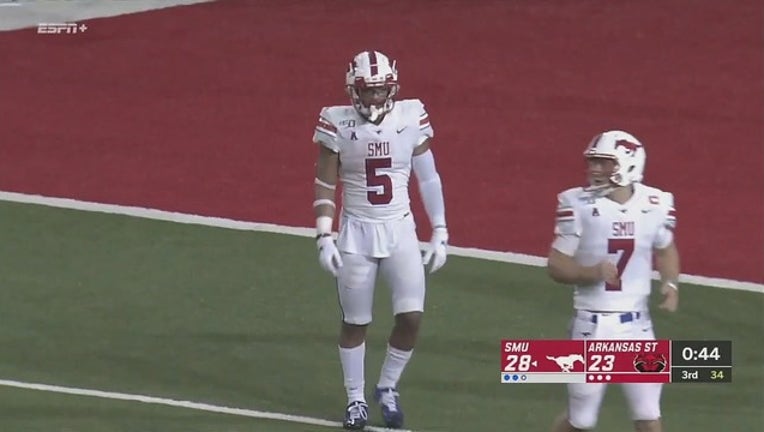 JONESBORO, Ark. (AP) - Xavier Jones ran for three touchdowns as SMU held on late for a 37-30 win over Arkansas State on Saturday in a season opener.

SMU led by seven when Arkansas State began its final drive with just over two minutes left. The Red Wolves were threatening when, with seven seconds remaining, the Mustang's Delontae Scott sacked ASU quarterback Logan Bonner, forcing a fumble which was recovered by teammate Nelson Paul, sealing the win for SMU.

SMU trailed early but took a 16-9 edge at halftime with the help of field goals by Kevin Robledo of 29 and 25 yards.

Bonner opened the second half with a pair of touchdowns to Omar Bayless to give the Red Wolves a 23-16 lead with 7:36 to go in the third. C.J. Sanders answered for the Mustangs with a 98-yard punt return for a score and Jones ran for a touchdown, lifting SMU to a 30-23 lead at the end of the third. Jones ran for another TD midway through the fourth to stretch it to 37-23.

Shane Buechele threw for 360 yards for the Mustangs. Ke'Mon Freeman ran for 86 yards and Jones finished with 56 yards.

Bonner threw for 324 yards and four touchdowns for the Red Wolves.