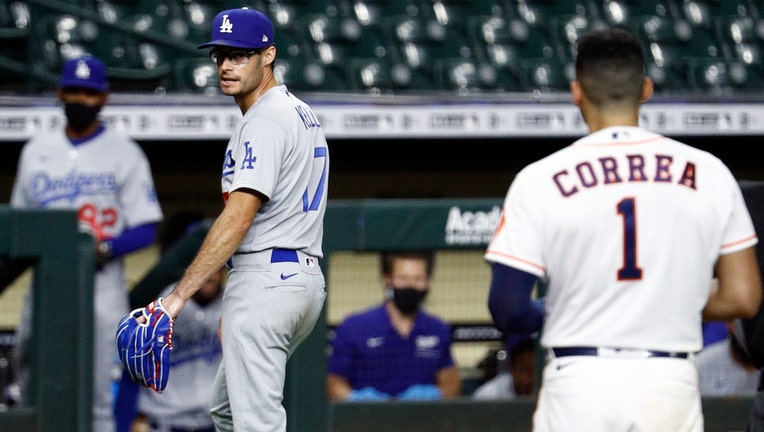 HOUSTON, TEXAS - JULY 28: Joe Kelly #17 of the Los Angeles Dodgers has words with Carlos Correa #1 of the Houston Astros as he walks towards the dugout at Minute Maid Park on July 28, 2020 in Houston, Texas. Both benches would empty after Kelly had t (Photo by Bob Levey/Getty Images)

LOS ANGELES - Los Angeles Dodgers reliever Joe Kelly had his suspension for throwing pitches near the heads of Houston hitters reduced to five games on appeal.

Kelly was originally penalized eight games by Major League Baseball on July 29, a day after throwing a 96 mph fastball near the head of Houston’s Alex Bregman and two curveballs that brushed back Carlos Correa.

The players association said Wednesday night it was dismayed by the length of the ban.

“While we understand the concerns raised by the league with respect to a bench-clearing incident during this challenging season, we’re disappointed by the decision,” the union said. “It was an unfair result for Joe Kelly given the cases presented.”

The Dodgers on Wednesday confirmed the reduced penalty that was first reported by Barstool Sports.

Kelly went on the 10-day injured list retroactive to last Sunday with right shoulder inflammation. He will serve his suspension when he returns.

After striking out Corea, Kelly curled his lip into a pouting expression and exchanged words with the shortstop.

Benches cleared after Kelly’s actions during the sixth inning of Los Angeles’ 5-2 win at Houston in the teams’ first meeting since it was revealed the Astros stole signs en route to a 2017 World Series title over the Dodgers.

Kelly denied that he purposely threw at the Astros. He has previously been suspended in his career for throwing at a batter.

The penalties were imposed by former pitcher Chris Young, MLB’s senior vice president of baseball operations, who issued his first ruling since taking over the job from Joe Torre.