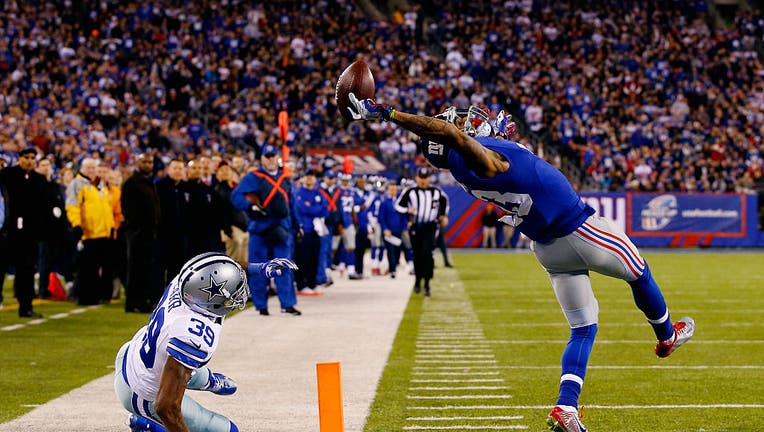 EAST RUTHERFORD, NJ - NOVEMBER 23: Odell Beckham #13 of the New York Giants scores a touchdown in the second quarter against Brandon Carr #39 of the Dallas Cowboys at MetLife Stadium on November 23, 2014 in East Rutherford, New Jersey. (Photo by Al B

FRISCO, Texas - The Dallas Cowboys could be making an addition to their receiving core, on Tuesday GM and Jerry Jones teased a possible signing of star wide receiver Odell Beckham Jr.

"Odell is someone we have all the appreciation in the world for," said Jones during an interview on Audacy's 105.3 The Fan. "The Cowboys star on that helmet, when he puts it on, could look pretty good."

Beckham Jr., who won the Super Bowl with the Rams last season after stints with the Giants and Browns, is currently a free agent.

He tore his ACL during the Super Bowl and has spent the last nine months recovering.

Beckham is expected to be medically cleared to play soon, and is drawing interest from teams around the league.

"We know that we should be aware that he is coming off this injury, but he showed he can do it and do it well last year," said Jones.

During a news conference on Monday Cowboys head coach Mike McCarthy said he has "always been a huge fan" of Beckham.

"All the guys that I've worked with – with the NY Giants and the Cleveland Browns – everybody has nothing but great things to say about him," said McCarthy. "Obviously, I've always been so impressed with his football-playing ability. But I've heard so many excellent things about him over the years. I think those are conversations for the future."

The betting site Bookies.com currently has the Cowboys as the favorite to sign Beckham, followed by the Packers and Giants.

The Cowboys take on the Green Bay Packers at 3:25 this Sunday on FOX 4.