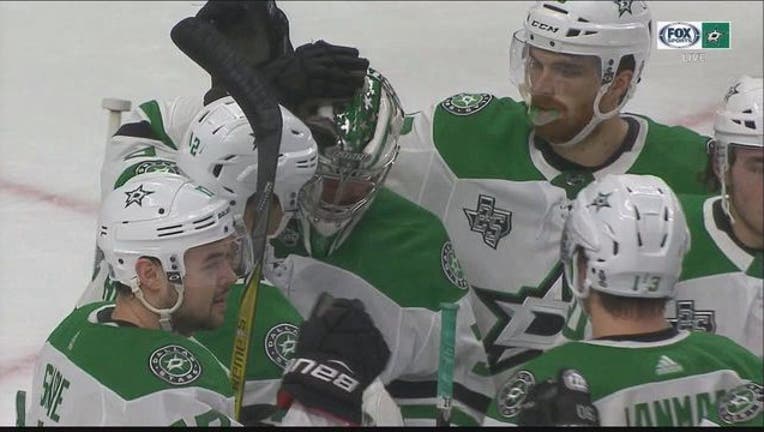 BUFFALO, N.Y. (AP) - Mattias Janmark had two goals and an assist, Esa Lindell added a goal and two assists and the Dallas Stars defeated the Buffalo Sabres 7-1 on Saturday

Jamie Benn and Radek Faksa each had a goal and an assist, and Remi Elle also scored for the Stars, who return home after a 3-0-1 trip. Benn extended his point streak to seven games.

The Sabres lost for the seventh time in eight games and were booed off the ice after the second and third periods in their most-lopsided defeat of the season.

Elie gave the Stars a 1-0 lead five minutes into the game when he knocked in the rebound from Janmark's shot after Lehner made a diving save. Janmark scored off the rebound on a power play to make it 2-0 late in the third period.

Janmark got his second goal of the game and 12th of the season when he beat Lehner on a partial breakaway up the left side early in the second period.

Reinhart scored the Sabres' first goal on a power play midway through the second period. Jack Eichel assisted on the goal, extending his point streak to five games. Eichel, Buffalo's lone All-Star, has 10 goals and 10 assists in his last 14 games.

Benn responded for Dallas 38 seconds later, deflecting Klinberg's long shot into the net for his 19th of the year and chasing Lehner. Goals from Lindell and Faksa extended the Stars' lead late in the period. Tyler Ptlick tipped in Klingberg's shot for the seventh goal around the halfway mark of the third period.

NOTES: Stars F Martin Hanzal went to the dressing room in the second period with a lower-body injury and did not return. . The Stars scratched F Martin Hanzal after he fell into the boards during practice on Friday. . The Sabres recalled F Nicholas Baptiste from the minors on Friday. Baptiste was scratched, along with D Nathan Beaulieu (illness) and D Victor Antipin (illness). . The Stars are 9-2-1 against Buffalo since the start of the 2010-11 season.