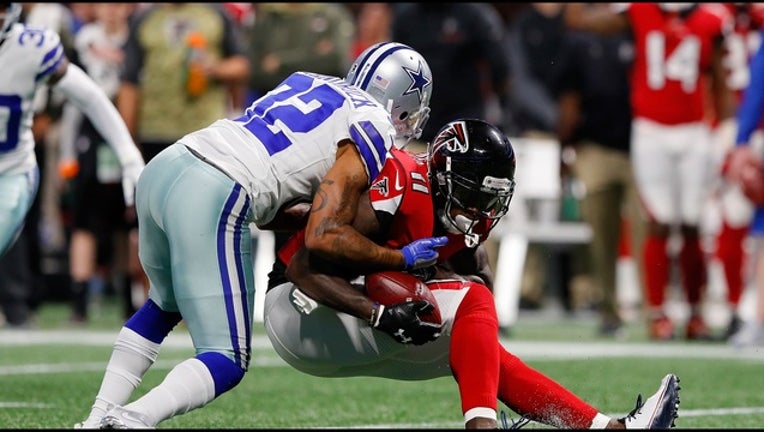 Julio Jones #11 of the Atlanta Falcons is tackled by Orlando Scandrick #32 of the Dallas Cowboys during the first half at Mercedes-Benz Stadium on November 12, 2017 in Atlanta, Georgia. (Photo by Kevin C. Cox/Getty Images)

FRISCO, Texas (AP) - Dallas defensive lineman David Irving will miss his second straight game with a concussion when the Cowboys visit Oakland on Sunday night, and cornerback Orlando Scandrick also is out again with a back injury.

Linebacker Justin Durant also was ruled out Friday because of a concussion.

Irving and Scandrick were injured in Dallas' win over Washington two weeks ago. Irving played the entire game before being diagnosed with a concussion. Scandrick sustained a small fracture in his back and also kept playing before leaving the game.

Irving is second on the team with seven sacks despite sitting the first four games on a suspension for violating the NFL's policy on performance-enhancing drugs. Scandrick is the veteran leader in a young secondary.

The Cowboys need a win to maintain realistic wild-card playoff hopes in the NFC.