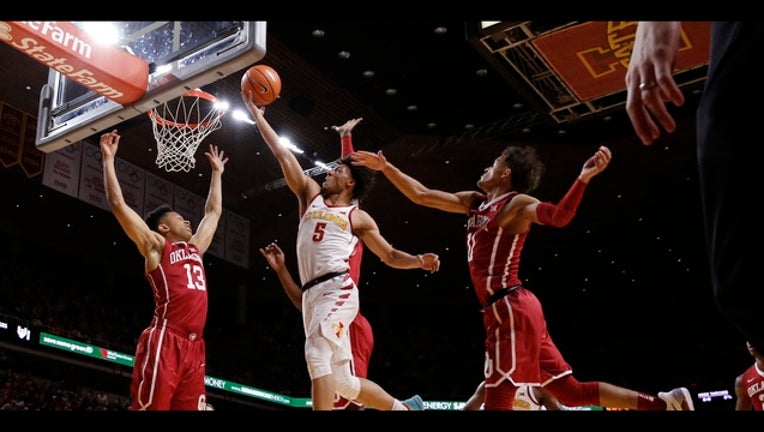 Lindell Wigginton of the Iowa State Cyclones lays up a shot as Jordan Shepherd and Trae Young of the Oklahoma Sooners block in the first half of play at Hilton Coliseum on February 10, 2018 in Ames, Iowa. (Photo by David Purdy/Getty Images)

Iowa State built and then blew a 17-point lead, but Donovan Jackson's 3 with 1:55 left put it ahead 80-77. Wigginton then beat the shot clock with a long 3, and Jackson hit a pair of free throws to clinch the win.

The Cyclones ran the Sooners (16-8, 6-6) out of the building in the first half, holding Young to just one 3 in the opening 19 minutes while building a lead that stretched to 40-23.

Young finished with 22 points and 11 assists, but he was just 1 of 8 on 3s with six turnovers.

The Sooners fought back behind their defense. They held Iowa State without a field goal for eight minutes and eventually tied the game at 71-all on Young's layup with 4:55 left.

Oklahoma: The Sooners are going to have a tough time convincing the NCAA Tournament committee that they deserve a high seed unless they can start winning some games away from Norman. This one was there for them late, but Young couldn't find the magic he has so often shown this season.

Iowa State: The Cyclones were able to beat Young and the Sooners even without their own starting point guard, Nick Weiler-Babb, who was out yet again because of knee tendinitis. This was an admirable performance for a team with just eight players suited up to play.

After losing to West Virginia at home and to the Cyclones on the road, Oklahoma might find itself out of Monday's poll.