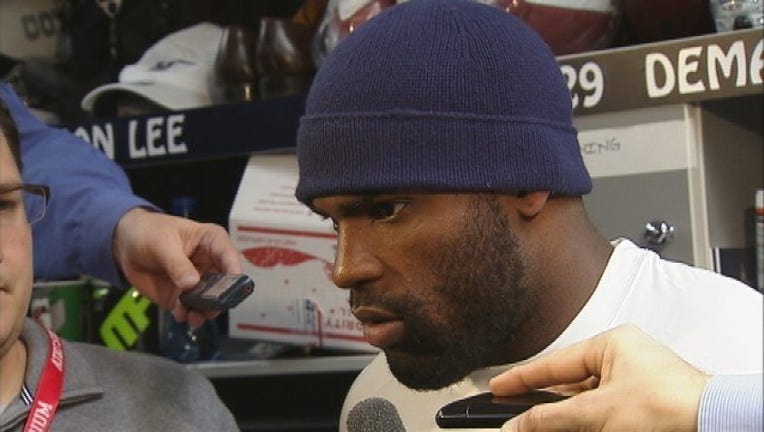 OXNARD, Calif. (AP) — Simply by showing up for practice every day at training camp, Joseph Randle separates himself from the other primary contenders to replace NFL rushing champion DeMarco Murray for the Cowboys.

That's because the other guys can't stay on the field.

Offseason free-agent pickup — and oft-injured — Darren McFadden hasn't practiced in California because of a hamstring issue. Change-of-pace running back Lance Dunbar was having a strong camp before a right ankle sprain that sidelined him for practice Thursday, a day after he was injured.

It's still a tad early to say the Cowboys are losing valuable time for the most important position battle of camp, even though they appear to be backtracking.

"Right now we're just grinding. We're getting different runs in every day," offensive coordinator Scott Linehan said. "Once we get our installation done, we'll start getting ready for preseason games. It'll be fun to kind of start thinking about how we're going to use them."

An MRI exam revealed no further damage beyond the strain for Dunbar, and executive vice president of personnel Stephen Jones said after practice it was still too early to look at bringing in other running backs.

The other two backs in camp, Lache Seastrunk and Gus Johnson, have never played in an NFL game.

"Some positions have more depth than others," coach Jason Garrett said Thursday. "Some remain healthier than others. But anytime you have someone out for any period of time, it's an opportunity for someone else to show us what they're about."

Each practice without Dunbar or McFadden puts Randle a day closer to being the primary back after two years as the backup to Murray, who signed with NFC East rival Philadelphia in free agency after rushing for a franchise-record 1,845 yards and 13 touchdowns. Randle had 343 yards and three scores, leading Dallas by averaging 6.7 yards per carry.

"Potential is a word that strikes me," Randle said. "What you could do, what you would've done, should've done. I've just got to put it on tape."

Randle is legally clear of two incidents that led to questions of whether he could be the backfield leader for Dallas.

He recently pleaded guilty in a shoplifting case from a suburban Dallas mall and could have the conviction dismissed if he completes probation. Authorities in his hometown of Wichita, Kansas, declined to bring charges in a domestic case in which Randle was accused of showing a handgun in the presence of his ex-girlfriend and their child.

"I think Joe has matured," running backs coach Gary Brown said. "We all have pitfalls. And you learn from your mistakes. The sad part would have been had he not learned from that. He understands the opportunity he has in front of him."

McFadden was the fourth overall pick by Oakland in 2008 but had seven mostly disappointing, injury-marred seasons with the Raiders. He missed at least one game every year until last season, when he played all 16 games but averaged just 3.4 yards per carry. He has just one 1,000-yard season.

And now McFadden is relegated to side work, waiting for the all clear from trainers.

"I'm very anxious. I can't even explain the words," said McFadden, who has 4,247 yards rushing and 25 touchdowns in his career. "Like you said, the history, I just want to show people that I can get out there and run and you don't have to worry about it."

Dunbar had high hopes of a bigger role last year, but Murray's dominance changed those plans. A long-term ankle injury will complicate his future.

"I've been here for three years now," Dunbar said. "I feel like I'm ready to take a big step. I try to go out there and do it each and every day and show them they can trust me."

Seastrunk was a sixth-round pick by Washington last year and part of the final cut after the preseason. He spent time on the practice squads in Carolina and Tennessee. Johnson signed at the start of camp after going to Oakland as an undrafted free agent and getting cut in May.

"We don't want to get into the evaluations quite so much about who's ahead of who and all that kind of stuff," Garrett said. "We just want to hopefully create an environment where those guys can get better and show us that they can do the job we're asking them to do."

Thanks to injuries, it's hard to see anyone other than Randle topping the list a week into camp.

NOTES: WR Dez Bryant was pulled from practice early with what he said was soreness in his left hamstring. He said after practice he was "fine." ... DE Kenneth Boatright sustained an apparent neck injury in a collision with LT Tyron Smith during a drill. He was getting a CT scan but had movement in his extremities.