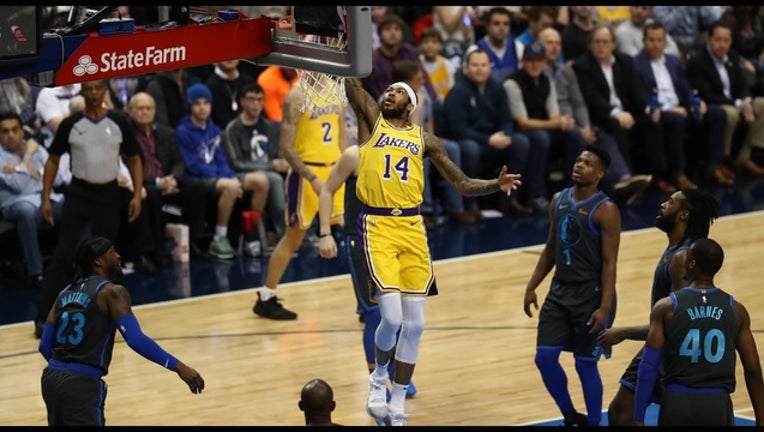 DALLAS, TEXAS - JANUARY 07: Brandon Ingram #14 of the Los Angeles Lakers takes a shot against the Dallas Mavericks in the first quarter at American Airlines Center on January 07, 2019 in Dallas, Texas. (Photo by Ronald Martinez/Getty Images)

The two young Lakers responded to their coach Luke Walton's demand for more passion after a blowout loss to Minnesota on Sunday. The duo helped rally Los Angeles from a double-digit halftime deficit.

The Lakers won for just the second time in seven games since LeBron James strained his groin on Christmas Day, and they swept the season series from the Mavericks 3-0.

An 11-2 run to start the fourth put the Lakers up 96-82 with 8:52 to play. Dallas closed to within seven twice in the fourth quarter, but each time Ingram drew the defense to him and dished to JaVale McGee for dunks.

Luka Doncic scored 27 points to lead Dallas. The rookie was virtually the entire Mavericks offense in the second half, making six of his team's field goals after the break. Dallas had 11 turnovers in the second half in addition to 11-for-43 shooting.

Dallas fell to 16-4 at home. The Mavericks entered the day tied for the fewest home losses in the NBA.

The Lakers came back from 13 down at halftime to tie the score 76-all when Ball hit the second of two free throws with 3:47 left in the third quarter, capping a 22-9 run.

With James still out, the Lakers got Kyle Kuzma back in the lineup after missing the past two games with a lower-back contusion. Kuzma missed his first eight shots and didn't score until midway through the second quarter, but he hit two 3s early in the third quarter to spark the Lakers' comeback.

The Dallas bench helped the Mavs build a double-digit lead and hold it steady through the second quarter. Reserves Dwight Powell, Dorian Finney-Smith and J.J. Barea combined for 23 points in the first half as Dallas led 67-54 at the break. The Mavs shot 58 percent from the field in the first half.

Lakers: In what might have been Dirk Nowitzki's final match-up against the Lakers, Walton joked that he wouldn't match up Nowitzki's countryman Moritz Wagner against his fellow German. "Mo has talked about that he's a national treasure there (in Germany)," Walton said. "We'll try to keep Mo off him. When legends get guys that look up to them guarding them, they kinda have their way." Wagner didn't get into the game.

Mavericks: Barea played his 800th game, becoming the 11th undrafted player from a U.S. high school or college to play 800 games since the NBA-ABA merger in 1976. ... Numerous Dallas Cowboys, including running back Ezekiel Elliott and linebacker Jaylon Smith, attended the game, drawing an ovation from the sellout crowd.

Mavericks: Host Phoenix on Wednesday. Two of the Suns' nine wins this year have come against Dallas.