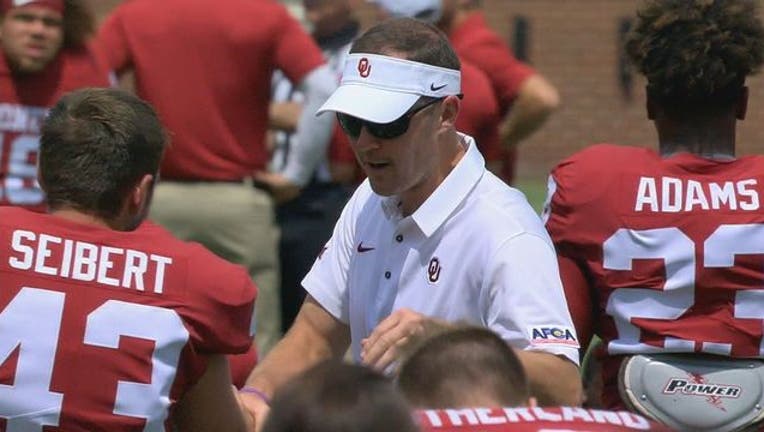 Almost every time, Stoops bounces back.

Stoops has been a popular figure to blame for the team's few failures during his second stint at Oklahoma, which began in 2012. For much of his run, the offense has been a consistent strength while the defense has been shaky on occasion. Last season, the Sooners beat Texas Tech 66-59 despite giving up 854 yards. This season, after the Sooners held on to beat Oklahoma State 62-52, some wondered whether Stoops' defense would cost the team a shot at a championship of any kind.

Well, look at the Sooners now. The Big 12 champions will face Georgia in a playoff semifinal at the Rose Bowl on Jan. 1 and the defense has been key in getting this far.

Second-team All-America linebacker Ogbonnia Okoronkwo helped the unit respond with a solid finish to the regular season. Oklahoma held TCU to 20 points in a critical showdown, Kansas to three points, West Virginia to 10 points in the first half of a 59-31 win and TCU to 17 points in a Big 12 title game victory .

Oklahoma coach Lincoln Riley said he appreciates what Stoops has accomplished in the face of criticism.

"He's a true professional," Riley said. "That whole staff, they've done a great job. We had some young guys at some really, really key positions throughout this year. That side was certainly, especially early on, really hit hard with injuries. A lot of different lineups and a lot of different guys playing. They've had some challenges, but they've continued to coach their tails off."

Stoops said he hears the critics but keeps the comments in perspective.

Stoops said he understands that he doesn't control how the story is told. He reminds players to focus on what they can control instead.

"Very physical," Okoronkwo said. "They're very physical. They're going to try to out-will you and challenge us. The challenge is just not getting enough bodies on bodies in the game. They always find a way to get an extra guy unblocked."

Riley said his defense set the tone at times during the second half of the season. He is excited about what the unit has become.

"They are playing really good football right now and they are rapidly getting better," Riley said. "Maybe one of the good things about having some time here is giving us time to grow and get better on that side of the ball, like we're doing right now."