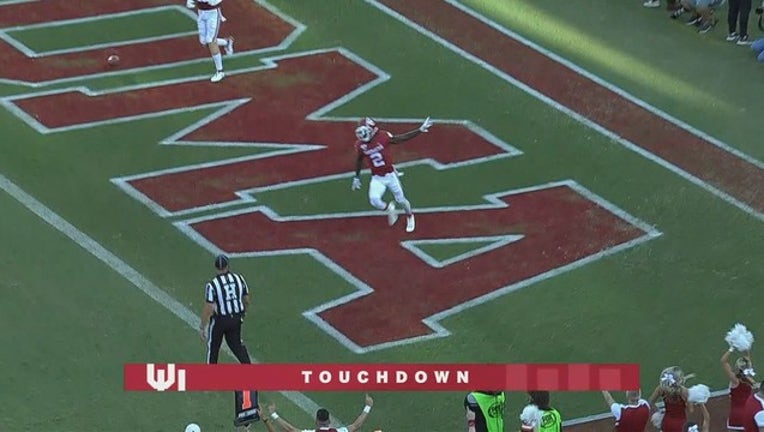 Jalen Hurts passed for 259 yards and three touchdowns in just over two quarters and fourth-ranked Oklahoma rolled past the Coyotes 70-14 on Saturday night. It was the Sooners' highest points total since scoring 79 in a victory over North Texas in 2007.

CeeDee Lamb had six catches for 144 yards and a touchdown, and Rhamondre Stevenson ran for 104 yards and a score for Oklahoma (2-0), which gained 733 yards against the Coyotes (0-2).

The Sooners wanted to work on the connection between Hurts and Lamb after a few misfires in the opener against Houston. They connected for gains of 48, 32 and 27 yards against South Dakota, plus a 3-yard touchdown in the first quarter.

"We've always been on the same page, but for it to show out in a game is a big confidence boost," Lamb said. "He did a great job distributing the ball all over. I can't wait to keep it going all year."

The Sooners had 423 yards passing and 310 yards rushing. It was too much for the Coyotes, an FCS program that lost to Montana the previous week.

"They're just so multiple," South Dakota coach Bob Nielson said. "You've got a tremendously deep group of really good wide receivers, you've got a couple of NFL-caliber running backs and a really talented quarterback who can make big plays with his feet and throw it. Put that together with a good offensive line, and I'm not sure there's going to be a lot of teams that do a good job defending them throughout the course of the year."

Austin Simmons passed for 244 yards and two touchdowns for South Dakota, but he threw two interceptions. Kody Case had six catches for 68 yards and a touchdown.

The Sooners led 28-0 at halftime. Oklahoma's defense got into the act early in the third quarter when Brendan Radley-Hiles scored on a 30-yard interception return. Radley-Hiles also had a fumble recovery.

Oklahoma forced three turnovers after failing to force any in its season-opening victory over Houston. It was a step forward in the Sooners' second game under defensive coordinator Alex Grinch.

"We're progressing on the scheme, but the most important thing to me is the mentality," Oklahoma coach Lincoln Riley said. "Do we play with the edge and the aggression, the physicality and the fundamentals that a great defense should play with? And I see us doing that more and more right now. It's certainly not there, but we are doing it more and more."

South Dakota: The Coyotes forced Oklahoma into a three-and-out to start the game, but that was about it for their highlights.

"Man, I was like a proud father out there," Lamb said. "I'm just happy. Jumping and screaming across the sidelines."

Oklahoma's Spencer Rattler, the consensus top quarterback in the class of 2019, made his debut against South Dakota and didn't disappoint. He completed all four of his passes for 50 yards and a touchdown and ran twice for 15 yards.

"I told him, 'You go out and do what you do and showcase yourself,'" Lamb said. "The sky is the limit for this guy. A lot of the hype he had coming into college is all true. He's a baller. He knows what he is doing."

The Sooners likely won't lose any ground after dominating as expected. There was little to gain against an FCS program.

Oklahoma: At UCLA on Saturday.