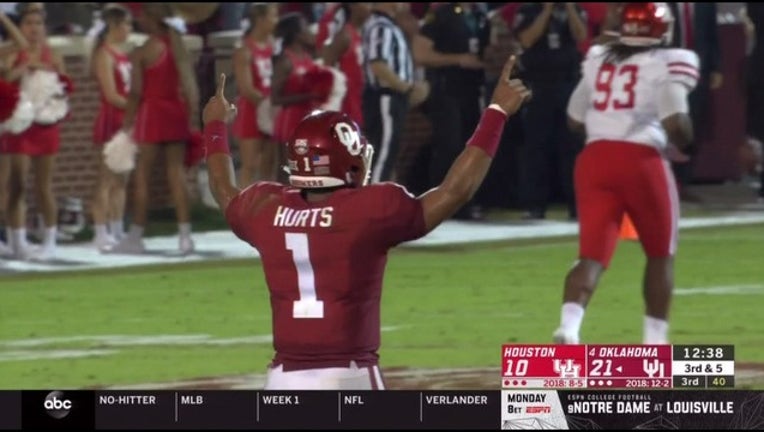 It was Hurts' first game for Oklahoma since he transferred from Alabama. He put on a show as his predecessor, 2018 Heisman Trophy winner Kyler Murray, watched. He posted 508 total yards, the fifth-most in school history.

Overall, the Sooners gained 686 total yards. Hurts finished with 332 yards passing and 176 yards rushing. Charleston Rambo caught three passes for 105 yards and a touchdown and Trey Sermon ran for 91 yards for the Sooners.

Oklahoma's defense was sharp too, constantly pressuring Houston quarterback D'Eriq King and limiting him to 87 yards passing in the first half. King, one of the nation's top quarterbacks last season, finished with just 167 yards passing in former West Virginia coach Dana Holgorsen's debut for the Cougars.

Houston: The offensive and defensive lines struggled, and that decided the game. The Cougars couldn't keep the Sooners away from King early in the game. He had his moments, but he couldn't produce when Oklahoma established itself in the first half. Oklahoma's offense was only stopped when it self-destructed.

Oklahoma: The offense looked sharp with Hurts, and coach Lincoln Riley showed he can still get results from a very different quarterback than his back-to-back Heisman winners, Baker Mayfield and Murray. The defense was more aggressive and tackled better than in recent years in its first game under new coordinator Alex Grinch. The Sooners forced three-and-outs on Houston's first two possessions to set the tone.

There's nowhere to go for the Sooners because the teams above them won, but they solidified their position.