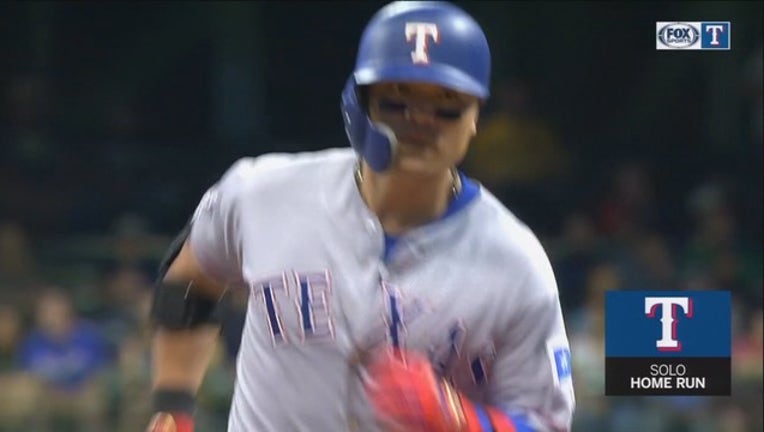 MILWAUKEE (AP) - Milwaukee Brewers pitcher Adrian Houser might just take the woozy feelings he had on the mound Saturday night if he has the same success.

Houser struck out a career-high 10 and rookie Keston Hiura hit his 14th home run as the Brewers beat the Texas Rangers 3-2 and extended their winning streak to five games.

Houser had a similar unsettled feeling in June when he vomited near the mound twice during a relief appearance against the Philadelphia Phillies.

Against Texas, he again had to step off the mound for a moment in the first inning.

"I felt good," said Houser, who struck out his first two batters but misplayed a ground ball by Elivs Andrus before the momentary illness. "I didn't feel sick at all. It was kind of like last time. It just snuck up on me.

"I have no idea (what happened), but if I keep pitching like that, I'll take it every time."

So will the Brewers, who watched as Houser held the Rangers without another baserunner through four innings. Nomar Mazara led off the fifth with a walk and Logan Forsythe followed with a single to break up the no-hit bid before Houser worked out of the jam.

Danny Santana's one-out solo shot an inning later marked the only blemish of the outing for Houser, who scattered three hits and a walk over six innings.

"He pitched a wonderful game," Brewers manager Craig Counsell said. "From the start, he knew what he was doing and it looked like it was going to be a pretty good night."

Pedro Payano threw a bases-loaded wild pitch that put Milwaukee on the board in the opening inning and lasted just three frames, allowing two runs on five hits and three walks, including a solo home run by Hiura.

"He couldn't get anything going," Houston manager Chris Woodward said. "He just couldn't find the strike zone. Then, when he did in the third inning, he left some balls over the middle of the plate and got hit. It's a learning experience for him."

Shin-Soo Choo's one-out solo home run in the eighth off Drew Pomeranz pulled the Rangers within one, and it looked as if they might at least tie the game after Pomeranz walked the next two batters, bringing up Rougned Odor.

Odor worked a 3-1 count on Pomeranz before swinging and missing at a pair of fastballs for the second out. Santana and Andrus, meanwhile, had taken off from second and first base, respectively, on strike three. Brewers catcher Yasmani Grandal made a perfect throw to get Andrus at second, ending the inning without further damage.

"Little miscommunication on running right there, but I don't mind," Woodward said. "Our guys have been running the bases aggressively. So, I'm not going to fault them for making an aggressive mistake there. Yasmani made a pretty good throw."

With Josh Hader unavailable after throwing 40 pitches over two innings a night earlier, Counsell turned to Alex Claudio to open the ninth inning. When Claudio allowed a single to left-handed hitting Mazara, Counsell called on Matt Albers to close it out, and the right-hander responded by getting Forsythe to bounce into a double play and pinch-hitter Hunter Pence to ground out to short for his third save of the season.

"He's just doing a tremendous job," Counsell said. "I'm happy for him because last year was a struggle but he's bounced back in a huge way and having a really nice season. We're counting on him for big stuff and he's been delivering."

Rangers: LHP Joe Palumbo allowed a run over five innings Friday night in a rehab start with Triple-A Nashville as he continues to work his way back from a strained left foot. The Rangers' No. 6 prospect coming into the season, Palumbo posted an 11.00 ERA in three big league appearances, but is 2-0 with a 3.25 ERA and 1.19 WHIP in 16 games (15 starts) for Nashville and Double-A Frisco this season with 101 strikeouts in 72 2/3 innings of work.

"We'll see him at some point, I just don't know when," manager Chris Woodward said. "He's getting closer."

Brewers: Christian Yelich said he was "better than (he) was yesterday" but sat out for a fifth straight game due to a recent bout of back spasms. Manager Craig Counsell said he wasn't sure yet if Yelich would return Sunday, a possibility with the Brewers scheduled to get Monday off.

The series wraps up Sunday with Milwaukee RHP Jordan Lyles (7-7, 4.97 ERA) taking on Rangers LHP Mike Minor (10-6, 3.06). Lyles has a 1.80 in two starts for the Brewers, who acquired him from Pittsburgh ahead of the trade deadline, while Minor is 2-2 with a 5.24 ERA in five starts since the All-Star break.