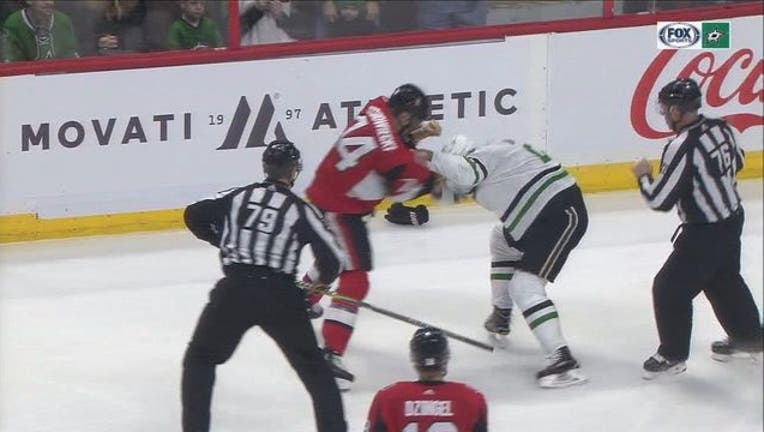 OTTAWA, Ontario (AP) - Mike Hoffman scored at 3:26 of overtime and the Ottawa Senators beat the Dallas Stars 3-2 on Friday night to win their third game in a row for just the second time this season.

Ottawa won on home ice for the first time since Feb. 17.

Marian Gaborik and Matt Duchene also scored for the Senators (26-33-11), and Craig Anderson made 23 saves.

Tyler Seguin and Tyler Pitlick had the goals for the Stars (38-26-8). Ben Bishop, who stopped 22 shots, made his first start since missing five games with a knee injury sustained March 5 against the Senators. Bishop has a 9-0-4 career record against Ottawa.

Dallas has lost four straight, its longest skid of the season.

The Senators started the third period on the power play and were able to take advantage as Gaborik scored his 10th of the season on a one-timer off some solid work from Thomas Chabot and Ryan Dzingel to tie it at 1.

The Stars didn't register their first shot until the 16th minute of the period, shortly after the Senators took a 2-1 lead on Duchene's goal.

Duchene took the puck on his backhand, moved it to his forehand and beat Bishop high from in close. Just more than a minute later, the Stars tied it 2-all as Pitlick put the puck past Anderson.

Neither team seemed to be able to get much going in the second.

Jean-Gabriel Pageau had a great chance but rang a shot off the post, and the Stars hit one at the other end.

Mark Borowiecki took an elbow to the mouth midway through the game and went to the dressing room, but was able to return.

Pitlick took a late double-minor for high sticking Senators defenseman Ben Harpur with just under a minute left in the second to set up Ottawa for a three-minute man advantage to open the third.

The Stars opened the scoring midway through the first on the power play as some good passing led to Jamie Benn feeding Seguin for a one-timer and his 38th goal of the season, a career high.

The Senators had their chances but hit the post three times, twice on the same power play.

NOTES: Ottawa's Mark Stone missed his third straight game with a leg injury. ... Stars D Marc Methot sat out his second consecutive game with a hand injury. The former Senator and Ottawa native was set to play his first game against the Senators since being selected in the expansion draft by the Vegas Golden Knights and later traded to Dallas.

Stars: At the Winnipeg Jets on Sunday night.

Senators: At the Columbus Blue Jackets on Saturday night.