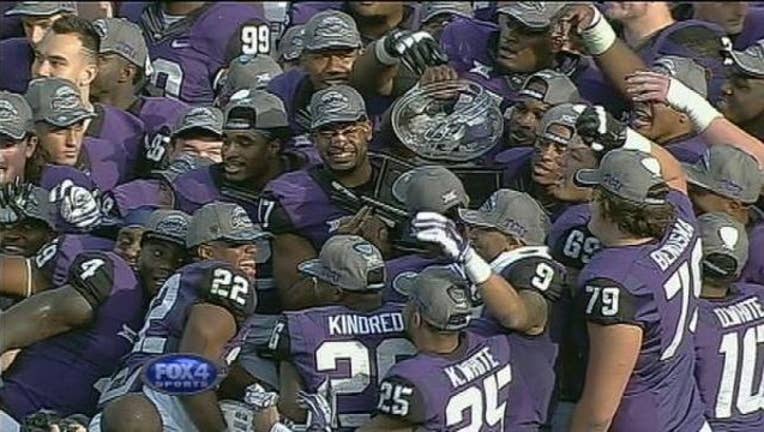 Trevone Boykin and his buddies at TCU have grown tired of hearing about last season, when the Horned Frogs shared the Big 12 title but were left out of the first College Football Playoff.

The second-ranked Horned Frogs finally get to start fresh with an early opener. They are at Minnesota on Thursday night with their highest preseason ranking ever.

"The talk is cheap and I'm ready to just go out there and play the game," said Boykin, considered an early Heisman Trophy front-runner after finishing fourth in the voting last season.

Funny how perceptions of TCU and its senior quarterback have changed in a year's time. Last August, coach Gary Patterson's team was coming off a 4-8 season and putting in a new up-tempo offense with new co-coordinators. There was uncertainty, at least publicly, about whether Boykin would even be the starting quarterback before what was a record-setting season.

"Our mindset really hasn't changed," Boykin said this week. "Our mindset is just like we came off a 4-8 season."

Boykin accounted for 4,608 total yards and 42 touchdowns as TCU finished 12-1, capped by a 42-3 victory over Ole Miss in the Peach Bowl after the playoff snub.

Minnesota got off to a 6-1 start a year ago on way to their second consecutive 8-5 season. That early loss was 30-7 to TCU when the Golden Gophers had five turnovers in Fort Worth. Now they get a prime-time home opener in the return game of the series that Patterson and good friend Jerry Kill reluctantly scheduled in the first place.

The coaches, both rural Kansas natives, were coy leading up to the game. They didn't even release depth charts until about 48 hours before kickoff.

"I think it soaked into our players as soon as the offseason started that we were going to open up with somebody that was either going to be No. 1 or No. 2 in the country," Kill said. "So I think our work habits were different. I think it helped us out tremendously."

Some other things to know when TCU and Minnesota play:

GOING FASTER: Now that Boykin and the Frogs have a full season of experience in the offense, along with another offseason to work on it with 10 returning starters, the quarterback said they are going to play "as fast as possible. ... We know we have a lot of speed on our side." They will also have more plays at their disposal to start this season than they did in Week 1 last year. "There's going to be a lot of surprises in this ballgame, even from our offense," Patterson said.

EXPERIENCED SECONDARY: Minnesota has seniors Briean Boddy-Calhoun, Antonio Johnson, Eric Murray and Damarius Travis all back in its secondary. The Golden Gophers held opponents to 194 yards passing a game and came up with 15 interceptions last season. Patterson said Murray was the best cornerback the Frogs faced last season, when they were 0-for-4 trying to throw to speedster Kolby Listenbee when he was covered by Murray.

GETTING SHARPER: Gophers junior quarterback Mitch Leidner struggled at times last season, when he completed only about half of his passes. Of his 11 TDs, seven were thrown to departed tight end Maxx Williams. Kill said Leidner has "been unbelievable sharp" in preseason practice of late. "It's the best I've seen him look since I've been here," the coach said. "He's done a really, really good job. ... He's got a boatload of confidence right now and more confidence than I've seen him have since I've been here."

DENTED DEFENSE: While acknowledging that TCU would be without two key defensive players for the opener, Patterson wasn't saying who they were. But missing from the depth chart was defensive end James McFarland, the team leader last season with seven sacks and the defensive MVP in the Peach Bowl.