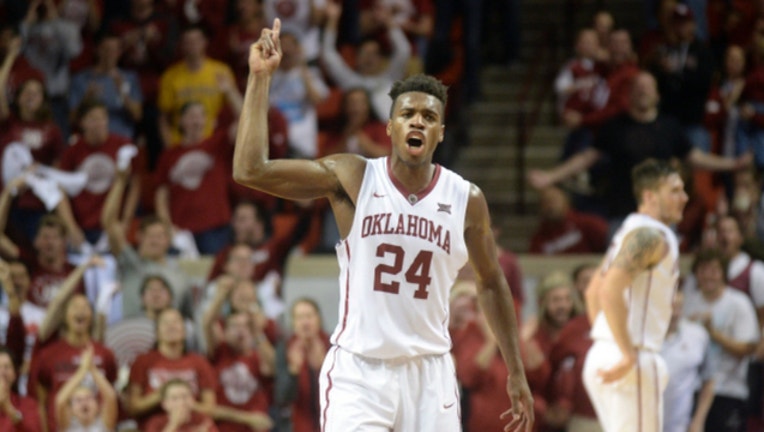 The Texas A&M Aggies will remember them for as long as they live. Buddy Hield and the Oklahoma Sooners know things can go so right or so wrong in such a short time.

The Aggies rallied from 12 points down in the final 44 seconds of regulation and beat the Panthers 92-88 in a double-overtime thriller in Oklahoma City.

"That's not something I think I'm going to ever forget," said Alex Caruso, who scored 25 points and helped the Aggies secure the biggest last-minute comeback in NCAA Division I history.

The Sooners had already made the short drive to their campus in Norman after beating VCU 85-81 and watched the conclusion of the Aggies' victory on TV.

"It was crazy," Hield said Wednesday at the Honda Center. "What they did was remarkable and I respect their fight. When we play them, if we get a big lead, we can't take that lead for granted because we know they're capable of making a run."

The Sooners and their perimeter shooters are in the Sweet 16 for the second straight year. Overall, this is their sixth Sweet 16 appearance since 1999, a span that also includes a Final Four appearance and two other Elite Eight berths.

The Aggies have reached the Sweet 16 for the third time in school history and the first since 2007. In 2008, the Aggies lost a second-round game to UCLA in the Honda Center, the home of the NHL's Anaheim Ducks.

Some other things to watch for when the former Big 12 rivals meet:

EVERYBODY'S BUDDY: Hield, who grew up in the Bahamas, is the leading scorer in the NCAA Tournament with 63 points in two games. He had 29 of his 36 points in the second half against VCU on Sunday. He's one of the nation's most lethal 3-point shooters, making 46.3 percent of his shots from behind the arc this season and 45 percent (9 of 20) in the tournament. While he's not the only Sooners playmaker, he's the guy the Aggies will focus on. "He could go for 40," A&M coach Billy Kennedy said. "He's a guy I would think of as a LeBron James type. You better not let a guy like that go off on you."

HIELD'S POSSE: Hield, Ryan Spangler, Isaiah Cousins and Jordan Woodard have started 102 consecutive games together. All four averaged double digit points this season and all have scored at least 1,000 career points. In the three seasons they have started together, the Sooners are 74-28. "When everybody's on the court we feel comfortable and we can be relaxed," Hield said. "You know, if coach calls our number, we know how to pick-and-roll, we know what Ryan likes, and Isaiah knows how to get the ball to me, and how I get the ball to Isaiah."

PERFECT: Texas A&M, which tied Kentucky for the SEC regular-season title, is 4-0 against the Big 12 this season, with victories against Texas, Kansas State, Baylor and Iowa State. "We're ready to go out and play," Caruso said. "Know that Oklahoma's fought and battled with teams we've beaten already, but they have something different about them. They've been playing really good all year, pretty consistent."

FIGHTING BACK: Kennedy is coaching in his first Sweet 16 five years after being diagnosed with Parkinson's disease. "It's no different message than Michael J. Fox or Janet Reno or so many other people who have had the disease in stressful jobs and have gone on and been successful," Kennedy said. "I'm pretty laid back. I'm from New Orleans, the Big Easy. I've coached a lot of games. I've been blessed that the stress really hasn't been a factor."

MANYANG: Oklahoma backup center Akolda Manyang left the team Sunday morning after the death of his brother in Minnesota. Coach Lon Kruger said Manyang will not rejoin the team this week.