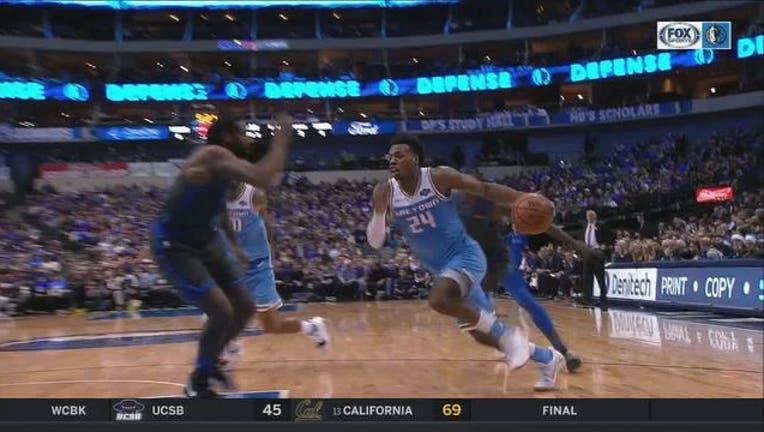 The Kings also spoiled the return of Dirk Nowitzki to the American Airlines Center. The 21-year veteran played his first home game after missing the first 26 games of the season while recovering from ankle surgery. He played six minutes at Phoenix on Thursday and scored three points in eight minutes Sunday.

Sacramento led for the entire second half, closing the third quarter on an 11-4 run to lead 93-83.

Dallas had closed within 98-91 when Fox outjumped DeAndre Jordan, who is eight inches taller, for a defensive rebound, then coasted downcourt for a layup. Nemanja Bjelica then hit 3-pointers on back-to-back possessions for a 106-97 lead.

Wesley Matthews' 3 with 1:46 to play pulled the Mavs within 112-107, but Fox dribbled out nearly the entire shot clock and drove the lane for layup. After a Dallas turnover, Fox fed Willie Cauley-Stein for a dunk to ice the game with 51 seconds left.

Luka Doncic had 28 points and nine assists, but no other Dallas player scored more than 15. Jordan tied his season high with 23 rebounds but Dallas was hampered by poor 3-point shooting, making only 9 of 35 (26 percent).

Marvin Bagley III, the No. 2 pick in the draft, was out with a bone bruise on his left knee, and Kings teammate Iman Shumpert was a late scratch with a hip contusion.

The Kings led 61-58 at the break. Hield had 17 points in the first half and Fox added 14 as the Mavericks, playing without Smith and Barea, struggled to stop the quickness of the Kings' guards.

With only rookie Jalen Brunson and veteran Devin Harris at the point guard spot, Doncic took over ball-handling responsibilities for long stretches of the game.

Kings: Bagley will be re-evaluated in 10 to 14 days. . Yogi Ferrell had eight points in his first game against Dallas since he left the Mavericks as a free agent this summer.

Nowitzki entered with 3:17 remaining in the first quarter to a standing ovation. He's the first player in NBA history to play 21 seasons with one team. Nowitzki missed his first three shots from the field but scored his first point on a technical foul shot with 7:48 to go in the second quarter, then nailed a short jumper eight seconds later.

He played eight minutes, all in the first half.

Kings: Second half of a back-to-back Monday at Minnesota.