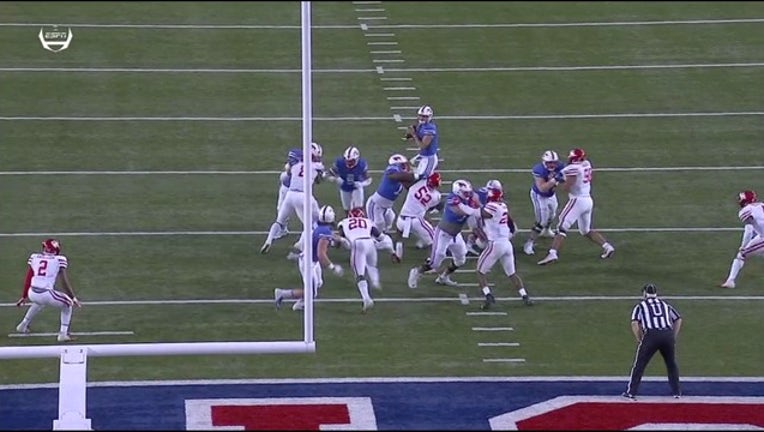 DALLAS (AP) - SMU has won only two games against Top 25 teams in the past seven years. Ben Hicks has been a big part of both of those wins against Houston.

Hicks threw for 318 yards and four touchdowns as SMU beat No. 17 Houston 45-31 on Saturday night.

"I feel like it was kind of a similar game, honestly," Hicks said. "Just like two years ago, I was happy to see the smiles on the seniors' faces who had been through so much and were able to kind of feel like they were part of something special. And I feel the same way now as an older guy."

The Mustangs (4-5, 3-2 American) never trailed, jumping out to a 17-0 lead after Hicks threw his second TD, a 17-yarder to Tyler Page less than a minute into the second quarter.

"This is really the first time we've left a ballgame all year where we said we've played well on defense, played well on offense and played well on special teams," SMU coach Sonny Dykes said. "And so I think the bar's been set for our guys from a performance standpoint and I feel like we know what we're capable of and I'm excited to see how they respond from here."

Hicks threw three TDs as a redshirt freshman in the shocker two years ago, when SMU beat the then-No. 11 Cougars 38-16, who then fell all of the way out of the poll.

The Mustangs are 0-18 against other Top 25 opponents in the past seven years, and had lost six in a row by an average margin of three touchdowns since the 2016 win over Houston.

That drive was interrupted for about 90 minutes because of lightning and heavy rain.

Freeman ran 20 times for 107 yards. The Mustangs had 196 yards rushing - 54 more than they had in their last three games combined.

The Cougars were held to 365 total yards, 205 below their national-leading 571 average coming into the game. They failed to reach 40 points for the first time this season, ending their nation's longest active streak at eight games.

"Well, No. 1 give credit to SMU," Applewhite said. "You never want to shortchange somebody's effort and how they prepared, and they're playing great football. ... In the first half, we didn't play well, we weren't moving the ball well enough consistently on offense."

King did have at least two passing TDs and a rushing score for the ninth straight game, the longest such streak for an FBS player in the last 20 years. But he ran 12 times for only 31 yards and was 11 of 22 passing for 175 yards a week after his 551 total yards against USF.

Houston: While their five-game winning streak was snapped, the Cougars still control their own destiny for getting to the American Athletic Conference championship game.

"Everything is still ahead of us," Applewhite said. "We're still the same football team we were the last five weeks when we won games, but we have to refocus."

SMU: Since starting 0-3 in Dykes' first season, the Mustangs have won four of six. The losses in that span are to still-undefeated UCF and in overtime to one-loss Cincinnati. Hicks has thrown for at least 291 yards in all three games since returning to the starting role after freshman William Brown started three games.

Houston played its second consecutive game without standout defensive tackle Ed Oliver because of a bruised right knee. He went through pregame warmups but didn't play.

"He had been cleared, but still there's a comfort level to be able to play," Applewhite said.

A week after the Cougars went from unranked to 17th, they could conceivably be unranked again. If they stay in the new Top 25 on Sunday, it will in the bottom couple of spots.

After going down 17-0, Houston scored two touchdowns in 54 seconds. King threw a 50-yard TD to Marquez Stevenson before Gleson Sprewell scooped up an SMU fumble and returned it 24 yards.

Houston is home against Temple next Saturday.

SMU hits the road to play UConn next Saturday.