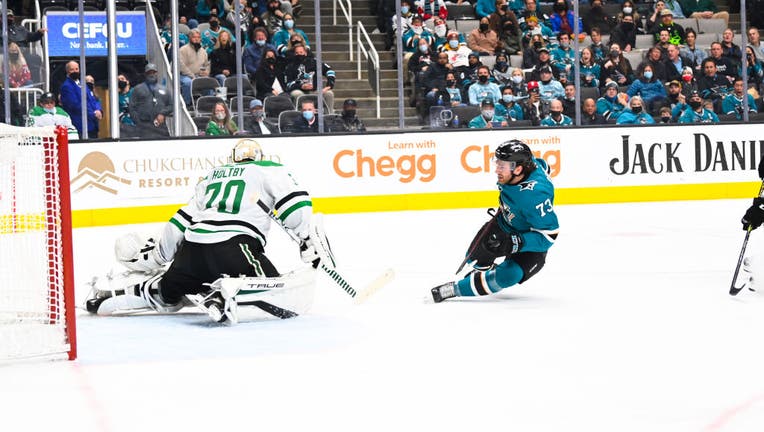 SAN JOSE, CA - DECEMBER 11: Noah Gregor of the San Jose Sharks slides into Braden Holtby of the Dallas Stars while on a breakaway in a regular season game at SAP Center on December 11, 2021 in San Jose, California. (Photo by Amanda Cain/NHLI)

SAN JOSE, Calif. (AP) - Tomas Hertl scored in his fourth straight game, James Reimer made 34 saves in his return to the lineup and the San Jose Sharks beat the Dallas Stars 2-1 on Saturday night.

Hertl now has six goals in the past four games, and Erik Karlsson added one late in the second for his fifth in the past seven games to lead the way for the Sharks. Reimer had missed the previous five games with a lower-body injury.

"We found a way to win it," Karlsson said. "Reims played great for us again and everybody chipped in when we needed to. I think it was a win that will give us some peace of mind and some confidence moving forward."

Michael Raffl scored the lone goal for the Stars, who went 0-3 on their road trip after winning the previous seven games. Braden Holtby made 23 saves.

"That’s probably the best road game we’ve played all year," coach Rick Bowness said. "We limited them and we just didn’t score. But we did a lot of good things tonight. ... I’ll take that game all year and that was just a solid game."

Hertl got things started midway through the first period when he deflected a shot from Timo Meier past Holtby.

Karlsson also kept up his strong play of late when he beat Holtby with a blast from the point late in the second period for his eighth goal of the season, matching the most he's had in any of his four seasons in San Jose.

"He's been a catalyst for our offense really for the last little while and he and Tommy are taking charge," coach Bob Boughner said. "He looks calm there. He has that skill of breaking us out of our end and he’s shooting the puck a lot better."

Raffl scored on a deflection midway through the third, but the Stars were unable to get the equalizer.

"We had a lot of chances," forward Jamie Benn said. "Obviously, that’s a positive. When you’re not getting those chances you start to question what you can do better. But we had our chances tonight. Their goalie played good. We just couldn’t find a way to get that second one."

Sharks forward Evander Kane made his debut in the AHL earlier Saturday, taking five shots for the Barracuda in a 5-1 loss to the Abbotsford Canucks. Kane was sent to the AHL after serving a 21-game suspension for submitting a fake COVID-19 vaccination card.

San Jose has indicated it has no plans to call Kane up to the NHL despite his $7 million a year contract, but the Sharks are hopeful they can find a trade partner for a player who scored 22 goals in 56 games last season.

Dallas Stars goalie Ben Bishop’s career is over because of a degenerative condition in his right knee, general manager Jim Nill said.

The Stars recalled Bishop from a conditioning assignment with the Texas Stars of the AHL after he allowed eight goals on 34 shots in his only game. The 35-year-old was placed on long-term injured reserve and is set to talk to reporters Tuesday.

"In the end, by going through the process, going down there and playing, he found out that it’s the end of his career," Nill told The Dallas Morning News.

Sharks: Host Seattle on Tuesday in the first meeting between the franchises.