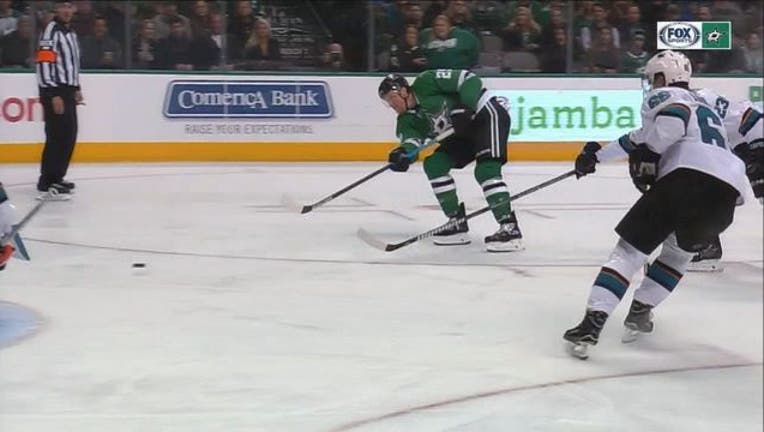 DALLAS (AP) - Miro Heiskanen and Brett Ritchie scored in the third period, and the Dallas Stars beat the San Jose Sharks 3-2 on Friday night for their fourth consecutive victory.

The game was tied at 1 before Heiskanen scored from the top of the right faceoff circle 4:38 into the third. Ritchie then got his second of the season at 6:26, making it 3-1 Dallas.

The Stars also got a solid performance from Ben Bishop, who made a season-high 41 saves.

Evander Kane and Logan Couture scored for San Jose, which was coming off consecutive wins against Montreal and Carolina. Erik Karlsson had two assists, and Martin Jones stopped 27 shots.

The Sharks dominated the first period, outshooting Dallas 13-5. San Jose nearly scored 1:14 into the game when Timo Meier's shot from the slot hit the right post.

At 9:22, Kane took a pass from Karlsson on the inside edge of the left circle and slid the puck inside the left post for his eighth goal of the season.

On a 2-on-0 break at the end of a Dallas power play early in the second period, Bishop trapped the puck under his pads. It trickled into the net, but the play had been whistled dead.

The Stars tied the game at 14:05. Roman Polak sent the puck out of the Dallas end and Mattias Janmark picked it up at the San Jose blue line for a breakaway. He beat Jones for his second goal of the season.

Dallas had a 2-on-1 break that put the puck in the net with 2:14 left in the second, but the officials ruled Jamie Benn had kicked it in.

Couture tipped in a shot by Karlsson 31 seconds after Ritchie's goal. But San Jose was shut out the rest of the way.

Sharks: Complete a quick two-game trip at Arizona on Saturday.