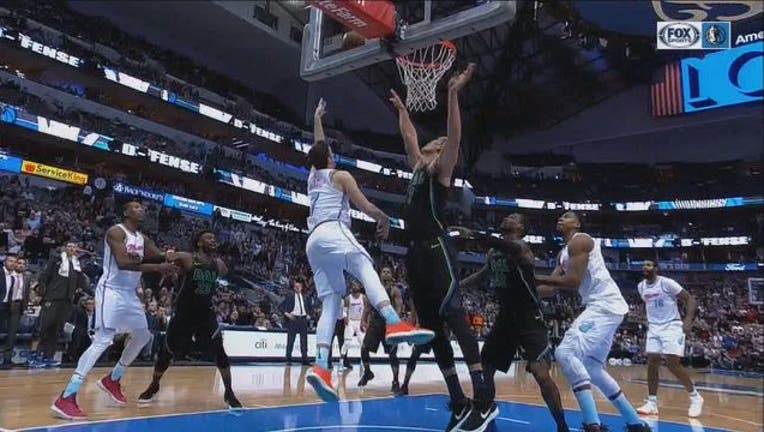 DALLAS (AP) -- Hassan Whiteside had 25 points and 14 rebounds as the Miami Heat completed another season series sweep of the Dallas Mavericks with a 95-88 victory Monday night.

The Heat never trailed after Goran Dragic had a steal that led to Tyler Johnson's tiebreaking 3-pointer to make it 38-35 just under 4 1/2 minutes left in the first half. Their lead went to double-digits again after Whiteside had consecutive baskets midway through the third quarter.

Harrison Barnes had 20 points and Wesley Matthews 19 for the Mavericks (16-35), who have dropped four games in a row and seven of eight overall.

This is the 14th time in their 30 seasons that the Heat, who beat Dallas 113-101 at home on Dec. 22, have swept the regular-season series. These teams twice met in the NBA Finals, with Miami getting its first championship in 2006 and the Mavs winning their only title in 2011.

Miami (29-21) led 51-41 when Josh Richardson hit a 3-pointer with 41 seconds left in the first half. But the Mavs trimmed that in half when rookie Dennis Smith Jr. made a defended buzzer-beating 3-pointer from about 27 feet to make it 51-46. James Johnson had a hand up in front of Smiths' face with Whiteside coming from the side.

Richardson had 14 points for the Heat, while Gragic had 13 and Kelly Olynyk 12.

Smith scored 14 for Dallas, and Nowitzki 10.

Heat: Whiteside had his 18th double-double this season. ... For the second game in a row, Miami won to complete a season sweep. The Heat beat Charlotte on Saturday night to complete a four-game series sweep. ... The only team the Heat have swept more in the regular season is Sacramento at 15 times. The lost to the Kings already this season.

Mavericks: Nowitziki has now played 49,941 minutes, only 59 shy of becoming only the sixth player in NBA history with 50,000 career minutes. Elvin Hayes had exactly 50,000 career minutes, and former Mavs guard Jason Kidd is fourth on the league's career list at 50,111. "It's a very staggering accomplishment and done with such grace and such little hype that it's probably very much taken for granted," coach Rick Carlisle said. ... G J.J. Barea missed his second straight game because of a left oblique strain.

Miami still has three games left on its four-game trip, and play Cleveland on Wednesday night.

The Mavericks hit the road for four games over nine nights, starting Wednesday at Phoenix.