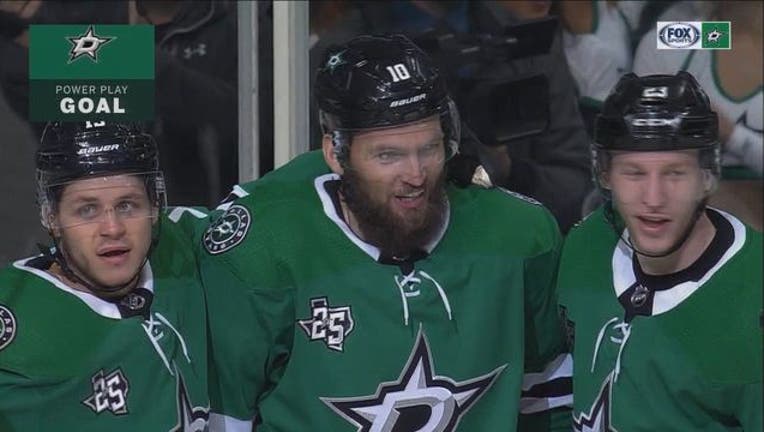 DALLAS (AP) - Martin Hanzal was happy to be back and the Dallas Stars were glad to have him on the ice.

The veteran center returned from injured reserve and scored the game-winning goal as the Stars beat the slumping New York Rangers 2-1 on Monday night.

On the power play, Hanzal skated across the goalmouth and tipped in Julius Honka's shot from the right point to break a 1-all tie 4:05 into the third period. Hanzal has missed 20 games this season, including the previous five because of a strained muscle in his lower body.

"I felt OK," he said. "It's hard to get in game tempo. It took me a couple shifts but after that I felt pretty good."

Tyler Seguin tied the game with a second-period goal for Dallas. He said the 6-foot-5 Hanzal gives the team a different dimension.

"He's huge. The goalie can't see anything, and he tips the puck and he gets a lot of goals that way."

The Stars' third straight win moved them within one point of St. Louis for third place in the Central Division. The Rangers, who have lost six of seven, are last in the rugged Metropolitan Division and three points out of a postseason spot in a crowded Eastern Conference playoff race.

"Unfortunately on their winning goal, we should have had a blocked shot by our defenseman," Rangers coach Alain Vigneault said, "but it seemed just to go by him. I think it was going wide, and their guy was able to tip it. We weren't able to get some like that."

"Just the first 10-15 minutes," Lundqvist said. "After that, we got going. But it took us some time, to be honest, to escape the first period with the lead."

Ben Bishop had 31 saves for Dallas.

In the first 20 minutes, the Stars tied their season high for shots in a period with 21 - but New York's David Desharnais scored the only goal at 17:55. Bishop stopped a snap shot from Desharnais, but he continued skating and put the rebound in the net.

Lundqvist stopped Dallas' first 31 shots before Seguin scored at 14:44 of the second. Jason Spezza's pass from low in the right faceoff circle deflected off the stick of Rangers forward Jesper Fast to Seguin at the top of the left circle. His slap shot went in off the left post.

The winning goal wasn't Hanzal's only contribution. He played on a penalty-kill unit that stopped all three Rangers power plays and won eight of 11 faceoffs.

"Hanzal just manages the game so well," Stars coach Ken Hitchcock said. "We've missed his presence. He's a real good pro, and I guess we're hoping that he stays healthy. He came through the game fine and that's a good sign. A healthy Martin Hanzal makes us very difficult to play against."

NOTES: Bishop was inactive for the previous game after being hit in the face by a puck on Thursday at Arizona. ... Rangers LW Jimmy Vesey was out after being hit in the head by Nashville's Filip Forsberg on Saturday. Rookie Vinni Lettieri, up from Hartford of the AHL, replaced Vesey and assisted on New York's goal. ... Seguin has seven points (four goals, three assists) in the last six games. ... Alexander Radulov, who assisted on Seguin's goal, took over the team lead with 51 points. ... The Stars have killed off all 11 of their penalties in the last three games. ... The Stars won both games in the season series 2-1. New York had won four of its previous five games in Dallas.

Stars: Go on the road for one game Thursday at Chicago.