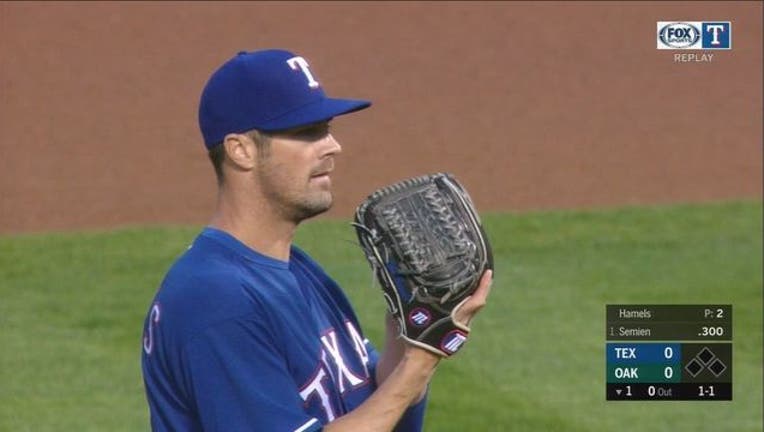 A few of his Texas teammates thought differently and repeatedly pelted the first baseman with wadded balls of napkins as he spoke with reporters.

On a night when Cole Hamels was masterful for five innings, Gallo's milestone home run - coming in his 204th career game - sparked a scuffling offense and helped the Rangers stop a three-game losing streak

Hamels struck out 11 in five innings, and Texas beat the Oakland Athletics 4-1 on Tuesday night.

"That's kind of what I do well so it's really not that big a deal," Gallo said. "I've always been that kind of hitter. I don't think too much about it."

The Rangers also ended a nine-game skid at the Coliseum.

Gallo connected on a 2-1 pitch from Kendall Graveman (0-1) in the second inning. Gallo, who also went deep on Sunday, moved past Frank Robinson, who reached 50 homers in 213 games.

"This is a special talent," Rangers manager Jeff Banister said. "This guy has the ability to hit the ball out of the ballpark in all directions. Last year when he made the strides to take some pitches, take his walks, really has helped him continue to grow to be a more complete hitter."

Hamels (1-1) bounced back from a rough start on opening day, dominating an A's lineup that had scored three or more runs in four of the first five games. He allowed four hits and walked three.

The left-hander recorded his first eight outs by strikeout. He yielded Chad Pinder's homer in the third and twice pitched out of jams while relying primarily on his cutter and changeup. Eight of his strikeouts came via the two pitches.

"When you have quite a few pitches in the repertoire you have to be able to be fine with them and throw them at any count," Hamels said. "At the same time, I need to be a lot more efficient with the balls and strikes."

Alex Claudio and Chris Martin combined for three scoreless innings and Keone Kela finished for his first save this season.

The game was played in a mostly empty stadium in front of an announced crowd of 9,157. That was slightly more than the 7,416 for Monday's game - the fewest to attend an A's game at the Coliseum since 2003.

Matt Olson and Matt Chapman had two hits apiece for the A's.

"Right now we're not swinging the bats as well as we're capable of," manager Bob Melvin said. "We're capable of scoring multiple runs and having big innings. We just haven't done that yet."

Beltre's hit was his 3,053rd in the majors. That matches Carew's mark for Latin players and 25th all-time, two shy of Rickey Henderson.

Graveman allowed four runs and eight hits. The A's opening-day starter has given up nine earned runs in 10 innings this season.

Rangers: RHP Tony Barnette (lower back strain) threw 24 pitches during an intra-squad game in Frisco. Barnette is slated to make a rehab start Thursday. ... Catcher Cameron Rupp signed a minor league contract and was assigned to Triple-A Round Rock.

Athletics: RHP Paul Blackburn, pegged to be the No. 3 starter, underwent a second MRI and continues to be bothered by forearm tightness.

THREE ON, THREE DOWN