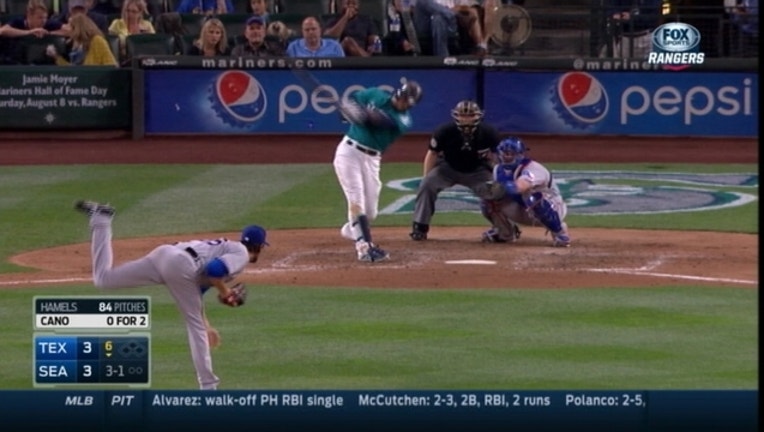 SEATTLE (AP) — In his second start for the Texas Rangers, Cole Hamels was hurt by the long ball.

"Not being able to get ahead of those key hitters, especially the home run hitters, and then getting into favorable counts where one bad pitch they can hit it out," Hamels said, "I definitely have to be able to establish strikes early and get ahead of them.

The left-hander has a 5.93 ERA in two outings with the Rangers since his July 31 trade from Philadelphia. Texas' only two losses in the last nine games came in starts by Hamels (0-1). He exited with a three-run lead in the eighth inning last Saturday, but the Rangers lost in 11.

Hamels, who was 6-7 with the Phillies, allowed eight hits and four runs over six innings. He struck out seven, walked two and balked home a run.

"He's a pretty good pitcher," Mariners manager Lloyd McClendon said. "We were 1 for 9 with runners in scoring position. That's a tribute to him. He's pretty special. Those guys don't come along often, guys like Hamels."

Seattle erased a 2-0 deficit to win for the fourth time in five games.

"That's good, especially against the best lefty in the game," Cano said. "That's who you want to beat, the No. 1 guy."

Rangers manager Jeff Banister thought his team was denied an excellent chance to increase its lead in the fourth.

With runners on first and second and none out, Shin-Soo Choo hit a grounder to Cano at second. He tossed to second base for the force, but it appeared shortstop Ketel Marte took his foot off the bag early.

"It would have been bases loaded, no outs in that situation and we had Iwakuma on the ropes," Banister said. "It changes the whole complexion of the inning."

Banister argued the call and was told it was not a "neighborhood play," meaning a phantom swipe of the bag. Those plays are not reviewable.

He asked for a replay review, but umpires in New York ruled it WAS a neighborhood play and the runner was called out.

"From my seat, it is confusing," Banister said. "You have a bunch of guys on the field that say it's not a neighborhood play and then you have another group that say it is. I'm sure they will get together and give us an explanation, but as it sits right now it is a little late for an explanation."

Cruz opened the sixth with a shot to left field for his 32nd homer in his first season with Seattle. That extended his hitting streak to 17 games.

Trumbo hit his fourth home run with the Mariners leading off the fifth. The three long balls were the most Hamels had allowed since Boston tagged him for four on opening day.

Iwakuma (3-2) threw a career-high 118 pitches. He gave up three runs and six hits with no walks and six strikeouts.

The right-hander needed 52 pitches to get through the first two innings.

"From the third inning on I felt they were more aggressive early in the count," Iwakuma said through a translator. "So when I saw that I wanted to pitch to contact and get early outs."

Carson Smith finished for his 11th save.

The Mariners have won six straight against Texas, their longest win streak versus the Rangers since late in the 2001 season.

Hamels' run-scoring balk made it 2-1 in the third, but Iwakuma's wild pitch in the fourth pushed it back to a two-run lead for the Rangers.

Before the game, the Rangers reacquired first baseman Mike Napoli from the Red Sox for a player to be named or cash. Boston also sent money to Texas as part of the trade.

Adrian Beltre's sixth-inning strikeout for Texas ended a streak of 48 at-bats without one. It was the longest streak in the majors. He then struck out in his subsequent at-bat, too.

Banister and six members of his staff visited the Seattle Seahawks' training camp and met coach Pete Carroll. "He's an impressive man. We are like-minded in our coaching philosophy, ideology," Banister said. He added that one of the reasons for the visit was, "when you want to be champions, you talk to people who have been champions. ... For me, it was a special day."

Rangers RHP Keone Kela is expected to return to the team Tuesday after a short stint with Double-A Frisco. Kela has had some minor injury issues but was sent down to give him a breather from the grind of his first big league season.

Rangers: LHP Martin Perez (1-2, 6.64) starts for the sixth time since returning from Tommy John surgery. He beat the Giants 2-1 on Sunday, becoming the first pitcher in six years to get at least 25 outs on no more than 80 pitches. He is 2-1 with a 2.60 ERA in six career appearances against Seattle.