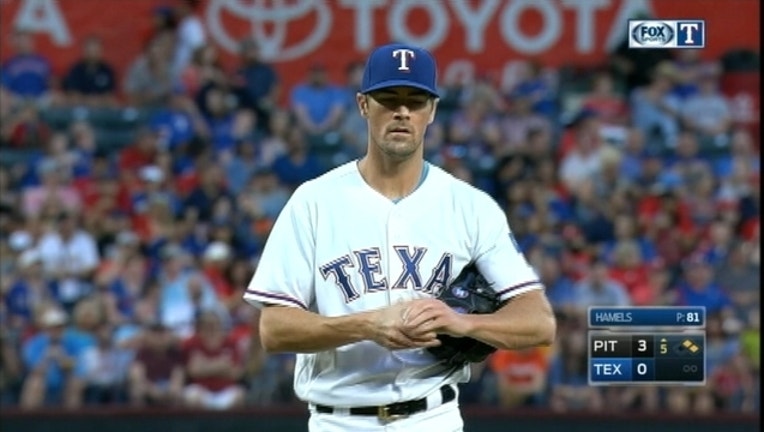 Andrew McCutchen had one of four home runs for the Pirates, who won their fifth straight and spoiled Jeff Banister's first game against the organization he spent his first 29 years in pro baseball with before becoming Texas manager last season.

Hamels (5-1) gave up eight hits and six runs — five earned — in 4 2/3 innings, his shortest outing since the start before throwing a no-hitter in his final appearance for Philadelphia last July 25. He came to the Rangers in a trading deadline deal six days later.

Hamels was trying to set the Rangers' franchise record for consecutive victories, a mark he will share with Bobby Witt from 1990, while also giving the first glimpse of the potential top of the Texas rotation a night before right-hander Yu Darvish's return from Tommy John surgery.

Instead, he gave up two homers, walked two and hit a pair of batters in his first loss in eight decisions at Globe Life Park and just his second regular-season defeat since joining the Rangers. Hamels had the second-longest winning streak in the majors behind Jake Arietta of the Cubs.

Jung Ho Kang, Pittsburgh's designated hitter, hit an opposite-field three-run homer to right in a five-run fifth that blossomed when six of the last eight hitters faced by Hamels reached base after a throwing error by first baseman Mitch Moreland.

Starling Marte, who had three hits along with David Freese, and Gregory Polanco also homered for the Pirates.

Jurickson Profar played his first major league game since Sept. 27, 2013, filling in for Rougned Odor as the Rangers second baseman began serving his suspension for punching Toronto's Jose Bautista during a May 15 brawl after the punishment was reduced to seven games from eight.

Also taking Odor's leadoff spot, the former top Texas prospect had a single in five at-bats after getting called up from Triple-A Round Rock.

Pirates: Marte was checked out after getting hit on his left foot by a pitch from Hamels in the fifth. He hopped part of the way to first base after deciding to stay in, but then sprinted to third on a single from Josh Harrison.

Rangers: CF Ian Desmond and RF Nomar Mazara stayed in the game after a nasty collision in the gap on a fly ball from Kang that fell for a single. Mazara stayed down longer than Desmond, who did a flying twist as he fell but popped up quickly.

Pirates: RHP Juan Nicasio (4-3, 4.46) had his last start cut short by a rain delay after one inning. He won his only career start against the Rangers while with Colorado, allowing one run in five innings with five walks in a 12-1 victory for the Rockies.

Rangers: Darvish makes his first major league start since Aug. 9, 2014. Darvish missed the end of the 2014 season with right elbow inflammation and had more issues while making just one spring appearance last year before undergoing elbow surgery. He had a 0.90 ERA in five rehab outings this month.