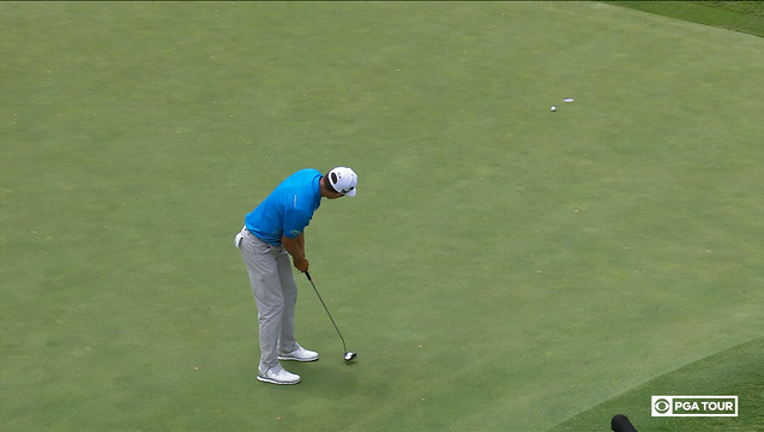 IRVING, Texas (AP) - James Hahn knows how close he came to making a couple of more putts down the stretch in the third round of the AT&T Byron Nelson. He still did enough to take the lead.

Even with his eagle chance at the 16th and birdie putt at 17 both stopping just inches short, Hahn shot a bogey-free 6-under 64 on Saturday to finish ahead of several players who had birdie streaks.

As for replaying those so-close putts in his mind, or thinking about having the 54-hole lead, the two-time PGA Tour winner had other plans after finishing his round.

"Tell me what my tee time and I'll just show up. You know, prepping for tomorrow I feel like is so hard. Sleeping on the lead, you can overthink it," he said. "I just like to go home with my wife, our 2-year-old daughter, watch some cartoons. Just kind of keep everything low key, casual."

With his 12-under 198 total Hahn was a stroke ahead of Billy Horschel, who birdied his last three holes for a 66 to take second place alone.

Jason Day had his own string of birdies, five in a row midway through his round and then a 60-footer at the 17th, during a 63 that was the best of the day and got him to 10 under. The fourth-ranked player in the world was tied for third with Kokrak, who shot a 72 after setting a Nelson 36-hole record with a five-stroke lead.

"I'm definitely not out of this golf tournament," Kokrak said. "I'd rather be stalking people than any other way."

Cameron Tringale and Sergio Garcia also finished with birdies on Nos. 16-18. Tringale was fifth at 9 under after a 67, with defending Nelson champion and Masters winner Garcia tied for sixth at 8 under after a 64 that also included three straight birdies at Nos. 11-13.

"I wasn't that far off on the front," Garcia said. "Then finally on the back nine ... started rolling some putts in, and it all comes down to that. Get a little momentum and confidence."

Top-ranked Dustin Johnson shot a 71 with five bogeys and four birdies and was seven strokes off the lead, tied for 19th.

Hahn shared the first-round lead after an opening 64, but slipped back with a 70 on Friday before another impressive round for him at TPC Four Seasons that included a 65-foot chip-in birdie at the par-4 No. 3 hole. This is Hahn's fourth Nelson, and he has shot 64 or 65 in half of his 14 rounds there.

After missing four consecutive cuts for the first time since his rookie year in 2011, Horschel is in the final group at the Nelson. The last of his three PGA Tour wins was in 2014.

"The last four, six weeks hasn't been ideal for me," he said. "I've been working hard and keep believing."

The last birdie for Day in his long streak came after driving the green at the 311-yard par-4 11th and two-putting from 37 feet.

Day's only bogey came when he blasted out of greenside bunker at the 14th, then pushed his 4-foot par chance just left of the hole and 2 1/2 feet past. When his 60-footer at the par-3 17th caught the left edge of the cup and dropped in, Day lifted both arms into the air, pumping his right fist while still grasping the putter in the other hand.

"Seemed like it was on auto pilot today, which was nice for a change," Day said. "It always helps when things are clicking that way."

About the same time Day's 16-foot birdie try at No. 18 curled just under the hole, causing him to wince, Hahn went to 11 under for the lead with his 13-foot birdie at the 15th hole and then added another birdie at the 527-yard par-5 16th after coming so close to an eagle.

Kokrak had his first bogey in 34 holes after missing the fairway at No. 3, then three-putting on the sloping green. He quickly made up that stroke with a 15-foot birdie at No. 4 and was back to 12 under with a five-stroke lead. But his advantage was down to one by time he finished his next hole, the par-3 5th, with a triple bogey.

Garcia beat Brook Koepka in a playoff last year to become the first two-time Nelson winner since Irving became the tournament's home in 1983. Day, who won the Nelson in 2010, could match that Sunday in the last round at TPC Four Seasons before a move to the new Trinity Forest Golf Club in south Dallas next year.