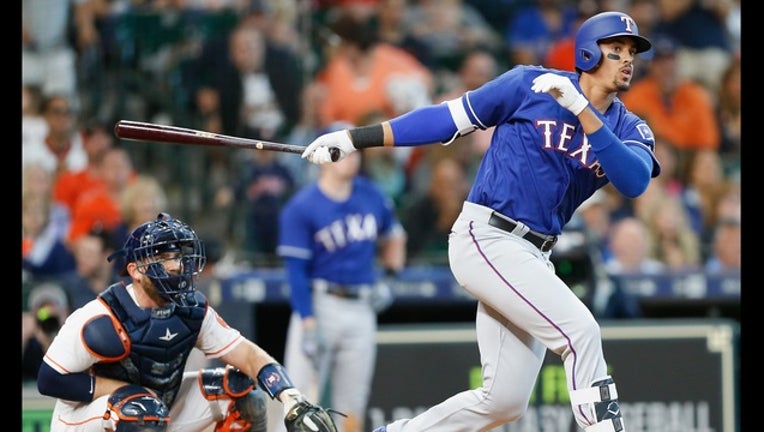 Ronald Guzman #67 of the Texas Rangers hits a home run in the eighth inning against the Houston Astros at Minute Maid Park on April 14, 2018 in Houston, Texas. (Photo by Bob Levey/Getty Images)

HOUSTON (AP) - Ronald Guzman said he is having the best week of his life, and after Saturday, it's hard to argue.

Guzman's first career homer tied the game in the eighth inning, and he put the Rangers ahead with an infield single in the 10th as Texas rallied from five runs down to beat the Houston Astros 6-5.

The Rangers, who snapped a five-game losing streak, loaded the bases with one out off Will Harris (0-1) before Guzman sent a hard grounder up the middle that Harris tried to grab. It ricocheted off Harris' glove, allowing Jurickson Profar to score.

"I was just ready to hit," Guzman said. "They challenged me, so I was going to do my best to put the ball in play. I wasn't thinking about homers, I was going to hit the ball hard somewhere and make it happen."

Harris struck out Ryan Rua and induced a groundout by Juan Centeno to end the inning.

Guzman was recalled from Triple-A Round Rock on Thursday to take the place of injured shortstop Elvis Andrus. He got his first career hit in Friday's game.

Keone Kela (1-0) pitched the ninth for the win. Chris Martin allowed consecutive singles to start the 10th but induced lineouts from Carlos Correa and Yuli Gurriel. Alex Claudio came on and retired Josh Reddick on a grounder to earn his first save.

"Obviously, at that point of our order, we feel really good," Hinch said. "Get a couple of guys on with no outs, put some pressure on them and they made pitches and got out of it."

Houston has lost three of four after starting the season 9-2.

Joey Gallo cut the lead to 5-4 with a two-run homer off the right-field foul pole in the eighth, and Guzman followed two batters later with a solo shot to right to tie it.

"To come back like that and have a guy like Guzman step up in huge situations, I think it speaks a lot about this team," Gallo said. "We are going to fight every day. Whatever the result may be, that's our attitude."

Brad Peacock gave up the three runs in the eighth.

"The one to Gallo was pretty good. I thought he just put the bat on it," Peacock said. "It just wasn't my day today."

Isiah Kiner-Falefa also hit his first big league home run, a drive to left to open the fifth. Adrian Beltre homered to right in the sixth to cut the lead to three. It was the 463rd of his career, tying him with Miguel Cabrera for 35th on the all-time list.

The Astros scored all five of their runs off Mike Minor in the fourth on Correa's two-run double and Gurriel's three-run homer to left. Minor worked five innings, allowing five hits.

Charlie Morton tied a career high with 12 strikeouts in his six innings, allowing two runs on six hits. The right-hander has 25 strikeouts in 18 innings over three starts.

Rangers: OF Nomar Mazara did not play because of what Banister called neck stiffness. "He was stiff overnight, came in this morning early to get treatment. He has gotten better. It's a situation where you have a little crick in your neck. It's kind of tough to turn your head and see the baseball in those situations," Banister said. ... OF Delino DeShields (fractured left hamate bone) hit off a tee Saturday.

Rangers: RHP Bartolo Colon will make his second start of the season Sunday night in the series finale. He allowed one run over six innings in his previous outing, a no-decision.

Astros: RHP Justin Verlander (2-0) makes his fourth start of the season and second against the Rangers. Verlander, who has a nine-game regular-season winning streak, struck out nine in seven scoreless innings in his last start Monday at Minnesota.