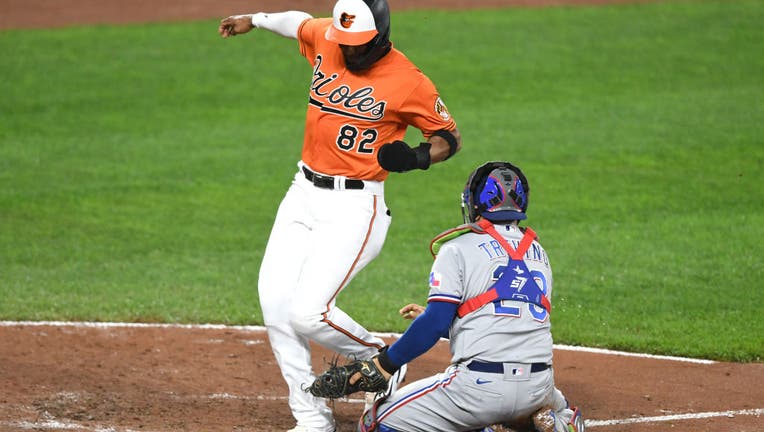 Jose Trevino and Nathaniel Lowe homered for the Rangers, who have lost nine of 11 and fell to 56-99 on the season. Texas is headed toward its first 100-loss season since 1973.

"I do like to win 7-1 once in a while," Baltimore manager Brandon Hyde said. "Those are always fun as well. Maybe score some runs and not give up many. That has not been a key component to our season this year. We play a lot of tight games. I'm not going to complain about a win ever."

The game was scoreless in the seventh when the 105-loss Orioles broke through against Texas starter Jordan Lyles (9-13). Trey Mancini walked and scored on Pat Valaika’s double, and Gutierrez followed with his second homer of the season, but his first for the Orioles.

"It felt great," said Gutierrez, who was acquired from Kansas City on July 3. "I was anxious to hit one with the Orioles. Hopefully, let's get some more."

Lyles, who is pitching for his sixth team since debuting in 2011, allowed three runs and seven hits with four strikeouts and one walk over 6 2/3 innings.

"Those last two or three at-bats, I wish we could have back," Lyles said. "The stuff was there. Obviously, the final line stings a little bit. It’s not what you want, especially in a 0-0 ballgame. You have to keep the door closed."

Trevino pulled the Rangers to 3-1 with a leadoff homer in the eighth off Brooks Kriske (2-1).

Dillon Tate allowed a solo homer to Lowe in the ninth but still picked up his third save.

Baltimore's Austin Hays doubled in the ninth and extended his hitting streak to 11 games.

The Rangers continued to play solid defense. This time, center fielder Leody Taveras threw out Gutierrez trying to score on Ryan Mountcastle’s flyball. The previous night, Taveras made a leaping catch over the wall to rob Pedro Severino of a two-run homer.

Orioles right-hander Chris Ellis ​​had his start pushed back from Tuesday due to arm fatigue. He allowed two hits with two strikeouts and one walk over three innings after feeling tightness in his shoulder.

"As the game went on, it kind of got worse," Ellis said. "It's just got to the point where I felt like I was not doing myself or the team justice by pitching anymore."

The Orioles are one of three teams in the majors with three players 26 and younger with at least 20 home runs — Cedric Mullins (30), Mountcastle (31) and Hays (22). The others are the Astros and Braves, both of whom are leading their respective divisions.

Orioles: RHP Spenser Watkins was recalled from Triple-A Norfolk. Watkins is 2-7 with an 8.42 ERA over 14 appearances (10 starts) with Baltimore this season.

Orioles: RHP Tyler Wells (right shoulder inflammation) was placed on the 10-day IL. The Rule 5 pick pitched the ninth inning Friday night and allowed a leadoff triple to DJ Peters before leaving with the injury. "It’s not too serious," Hyde said. … LHP Bruce Zimmermann (ankle) could be activated next week and moved into the rotation for the series against the Boston Red Sox. Zimmermann (4-4, 4.83 ERA) hasn’t pitched for the Orioles since June 13.

Rangers: RHP Dane Dunning (5-9, 4.34 ERA) was reinstated from the COVID-19 injured list on Sept. 10 and took the loss in his last outing against the Yankees, allowing two runs and three hits over 2 2/3 innings.