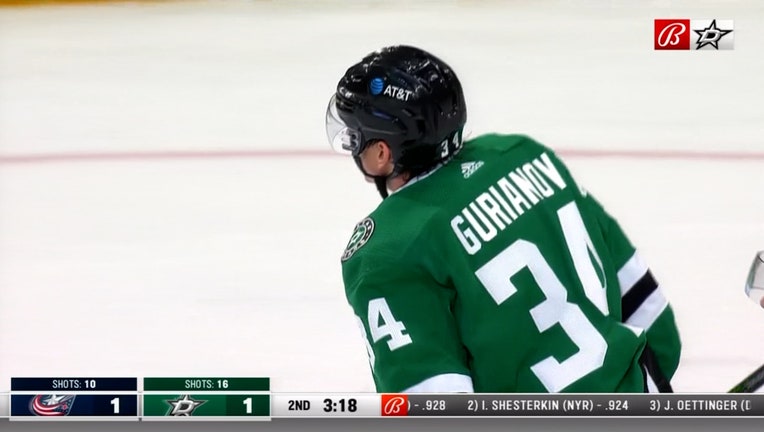 DALLAS - Denis Gurianov had his first two-goal game of the season to end a long scoring drought, Miro Heiskanen and Joe Pavelski also scored goals and the Dallas Stars beat the Columbus Blue Jackets for a much-needed 4-1 win Thursday night.

The defending Western Conference champion Stars, who are in sixth place in the Central Division, went ahead for good when Jason Dickinson assisted on goals by Gurianov and Heiskanen just more than a minute apart late in the second period for a 2-1 lead.

Gurianov, without a goal the previous 10 games and only one in 18 games, scored again with just under 12 minutes left in the game. It came on a shot from the left side parallel to the front of the net that ricocheted off Blue Jackets defenseman Michael Del Zotto into the net.

"I just try to not think about it too much and just go on the ice and play my game, doing my best to try to score," Gurianov said of the last few weeks. "Every game is a new experience for me, and I'm trying to do my best."

Stars coach Rick Bowness said it was the best game this season for Gurianov, the 23-year-old forward who had a four-goal game in the playoffs last summer.

"Today, he skated and competed, and he got rewarded for that," Bowness said. "That second goal, been waiting for those breaks for a long time. He needed one of those, but he got it because he was skating and working."

Joe Pavelski capped the scoring with his team-leading 17th goal as the Stars won on a night when Nashville and Chicago, the teams directly ahead of them in the standings, both lost.

The Blue Jackets and Stars wrap up their regular-season series on Saturday night, with Dallas holding a 4-2-1 series lead.

Jack Roslovic scored on Columbus' first shot, taking a pass from Del Zotto and pushing the puck through a wide-open gap to the net behind rookie Jake Oettinger's extended left leg. The Blue Jackets, who by last Monday's deadline had traded away longtime captain Nick Foligno along with veterans Riley Nash and David Savard, have lost four in a row and seven of eight.

Oettinger, playing for the first time in five games, stopped the final 17 shots he faced.

Blue Jackets goalie Elvis Merzlikins had some close calls even before Gurianov and Heiskanen scored 79 seconds apart to make it 2-1 at the second intermission. Merzlikins had 27 saves.

Gurianov's initial goal came when he knocked in his own rebound past a sprawling Merzlikins to tie it at 1 with 3:18 left in the second period. Heiskanen scored, including an assist from Gurianov, on a shot from the slot that went under the goalie's right arm.

"Kind of with this group, if we get one goal, we’re going to get more," captain Jamie Benn said.

PUCK TO THE FACE

Columbus forward Oliver Bjorkstrand had a cut on his nose after taking a puck to the face in the closing seconds of the first period. Stars forward Blake Comeau was trying to chip the puck away out of the slot when he went under the visor of Bjorkstrand, who dropped to the ice momentarily before getting up and skating slowly to the bench. He was wearing a full face shield when play resumed in the second period.

Six-time All-Star center Tyler Seguin, still rehabbing from offseason hip surgery, went through the morning skate with the Stars. Bowness said it was a positive step for Seguin, who looked good on the ice. Stars general manager Jim Nill said Monday that Seguin could debut in about two weeks, which could be April 26 at home against Carolina.