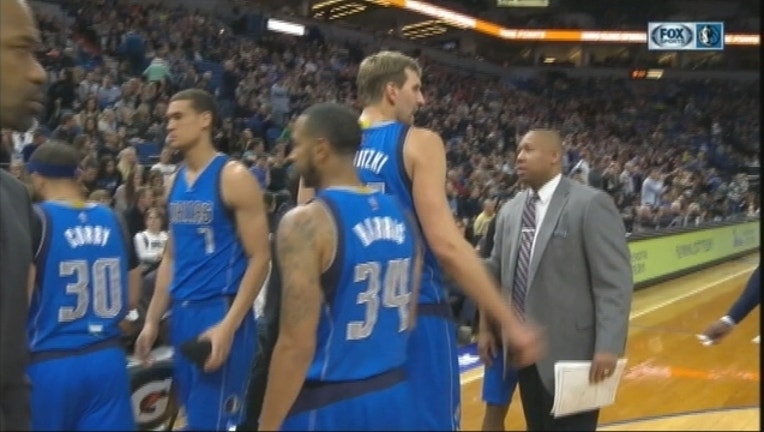 But Memphis had to weather a 3-point shooting rally in the closing minutes. Dallas made six of its first nine 3-point attempts in the final frame, a jumper by Wesley Matthews cutting Memphis' advantage to 94-90 with just over a minute left.

But Dallas could get no closer, dropping its fourth straight.

Troy Daniels finished with 21 points for Memphis, shooting 7 of 12 from outside the arc.

Dallas trailed by 15 with about 8 minutes left when Barea and Matthews converted consecutive 3-pointers. Another 3 from Yogi Ferrell - his only points of the game - brought the Mavericks' deficit to single-digits.

Nowitzki, Barea and Matthews would add a trio of 3-pointers over a 1-minute span late to pull Dallas close, but not close enough.

The Mavericks dealt with poor shooting to open both of the first two quarters, missing five of six shots to start the game and six straight to open the second quarter.

The second set of misfires contributed to a 16-2 run and an eventual 21-point Memphis lead. Dallas was at 22 percent shooting in the half, including hitting 2 of 16 shots outside the arc.

That led to Memphis carrying a 55-34 lead into the break, Conley collecting 14 points, while Daniels and Randolph scored 12 each.

No Mavericks were in double figures at that point.

After halftime, it was Memphis struggling to hit shots, setting off a 16-4 rally by Dallas to bring the deficit to single digits - 59-50. But the Grizzlies countered with eight straight points to take the lead back to 17.

That allowed Memphis to hold a 74-62 lead entering the fourth.

Mavericks: The NBA announced Friday that G Devin Harris was fined $25,000 for his actions after ejection from Wednesday's game at New Orleans. ... The Mavericks recorded 15 assists, breaking a string of nine straight games of at least 20 assists.

Grizzlies: With its seventh straight playoff berth, Memphis has the third-longest streak of postseason appearances behind Atlanta and San Antonio. ... The win assured Memphis (42-34) of its seventh consecutive winning season. ... The Grizzlies' sixth 3-pointer of the game, converted in the second quarter, gave Memphis 700 on the season - a mark not previously reached in franchise history.

Grizzlies coach David Fizdale said the timetable for the return of center Marc Gasol, who missed his fourth game with a sore left foot, remains unclear. "He did work out (Friday), which was good," Fizdale said. "He moved on it. There's still some soreness there."

With the Mavericks virtually eliminated from the last Western Conference playoff spot, coach Rick Carlisle seems to be turning to younger players down the stretch. "This is an important time for us to look at these guys," Carlisle said. "I'd rather look at them playing against guys like (Mike) Conley or (Zach) Randolph instead of undrafted free agents in the summertime."

One Mavericks rookie - Jarrod Uthoff from Iowa - scored two points in the loss Wednesday to New Orleans, his first points in the NBA. "That's a pretty big deal for a guy who has the NBA dream like all of us did growing up," Carlisle said. Uthoff didn't play Friday night.

MAVERICKS: Dallas is in the midst of a five-game road trip and plays at Milwaukee on Sunday.

GRIZZLIES: Memphis heads out on its final road trip of the season, playing the Lakers in Los Angeles on Sunday.