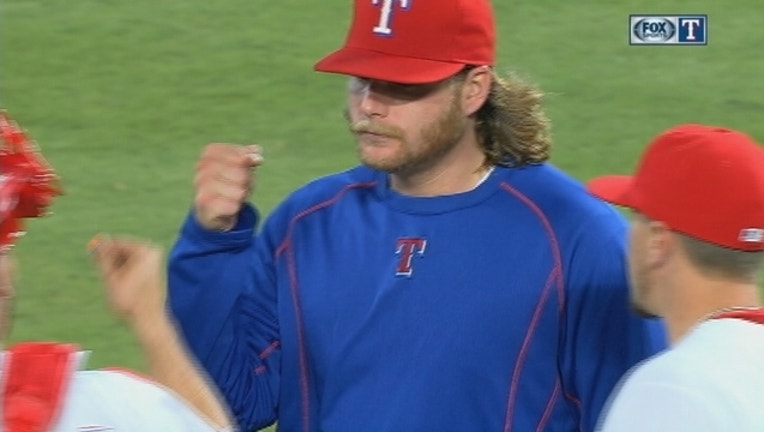 The Rangers ended a four-game skid, during which they totaled five runs. They were no-hit for six innings by Yankees right-hander Nathan Eovaldi on Monday night.

In the third, Texas got all five runs with two outs after Prince Fielder was intentionally walked by Luis Severino (0-3) to load the bases. Ian Desmond walked, then Moreland hit his single. Desmond scored on a wild pitch, and Elvis Andrus had an RBI single.

Griffin (3-0) allowed four singles and a walk and struck out five. Griffin, who didn't pitch in the majors during the past two seasons following Tommy John surgery, has limited opponents to a .189 batting average in four starts.

Desmond and Rougned Odor homered for Texas, and Andrus had three hits.

Severino lasted only three innings, giving up seven hits, two walks and a wild pitch. He went into the game with the worst run support among AL starters, averaging 1.33 runs.

Nomar Mazara, who turned 21 on Tuesday, had two singles and scored twice. Mazara, the majors' youngest player, has hit safely in 11 of 14 games with six multihit games since being promoted from Triple-A Round Rock on April 10.

Desmond had two hits and scored three runs — twice on wild pitches. He is hitting .448 with three home runs in his last eight games after hitting .091 with no homers in his first 12.

One of Mark Teixeira's two hits was a seventh-inning single off the glove of shortstop Andrus, playing on the right side of the infield in a shift, to score Brett Gardner.

Ronald Torreyes had two hits while starting at third base with Chase Headley given the night off. He is 8 for 16 in eight games.

Rangers: LHP Cole Hamels (groin strain) said he hopes to start Saturday at home against the Angels after being skipped Monday. Hamels threw a 25-pitch bullpen session on Monday and said Tuesday that he felt good.