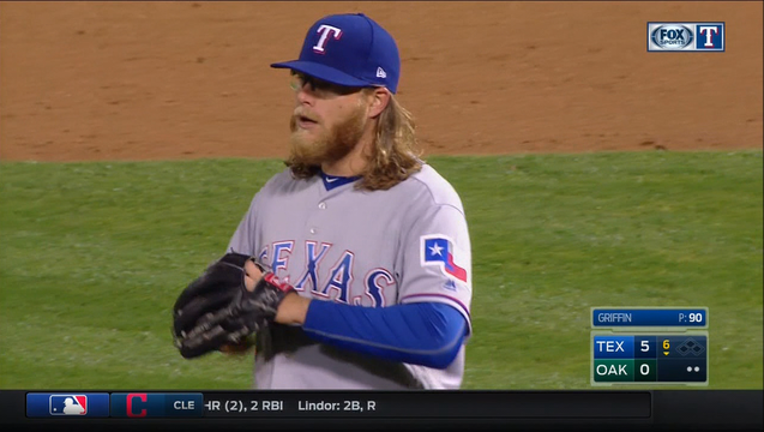 OAKLAND, Calif. (AP) - Unlike the first time he faced the Athletics this season, Texas right-hander A.J. Griffin had no problem keeping his emotions under control while pitching against his former club.

Having a strong curveball to counter an 87 mph fastball definitely helped, too.

Griffin pitched six scoreless innings in his return to the Oakland Coliseum, Nomar Mazara had two hits and three RBIS, and the Texas Rangers beat the Athletics 7-0 on Monday night.

"Haven't pitched off that mound in a long time and I felt right at home out there," said Griffin, who was released by the A's following the 2015 season. "My first outing this year against the old team in Arlington, I was a little bit more jacked up. We were just pitching my game, keeping them off balance."

Griffin (2-0) spent his first two seasons in the majors with the A's before being released near the end of 2015 after Tommy John surgery a year earlier. He hadn't pitched at the Coliseum since making his final start for Oakland on Sept. 18, 2013. He looked very comfortable in his return.

The Rangers' shaggy-haired right-hander allowed one hit and one walk, retired the final 14 batters he faced and finished with eight strikeouts - one shy of his career high.

"I would say that in the two years we've had him that's about as smooth of an outing, in control, that he's had," Texas manager Jeff Banister said. "Just a masterful game by Griff tonight."

Three Texas relievers combined for the final nine outs to complete the three-hitter.

It was a rough day all around for Oakland, which extended its season-high losing streak to four games. The A's had only five baserunners and one got past second base.

"Just being able to pour that curveball in there first pitch, it just sets up anything that I want to do the rest of the at-bat," Griffin said. "It's good to be in the driver's seat at that point."

Before the game Oakland placed opening day starter Kendall Graveman on the 10-day disabled list with a strained right shoulder and announced that shortstop Marcus Semien will undergo surgery to repair a broken bone in his right wrist.

Texas opened the game with three consecutive hits off A's starter Jharel Cotton (1-2) then pulled away with a four-run fifth.

Mazara had an RBI double in the first and a two-run single in the eighth.

The start of the game was delayed eight minutes due to rain, one day after the A's home game against Houston was postponed due to weather.

Cotton allowed five runs over 5 1/3 innings. The right-hander retired 12 straight during one stretch but walked four batters, three of which scored.

"That's something we preach, don't give them free passes," Oakland manager Bob Melvin said. "Here recently, not only have we done it, but it's cost us. It is a concern and we've got to continue to try and pound the strike zone."

Oakland center fielder Rajai Davis was charged with a throwing error in the fourth inning, marking the 10th consecutive game in which the A's have committed at least one error. That gives Melvin's ballclub a majors-leading 16 errors this season.

Rangers: Closer Sam Dyson was placed on the 10-day disabled list with a bruise on his right hand, one day after the pitcher blew a save for the third time this season. Dyson was hurt while trying to field a comebacker in the ninth inning of Sunday's 8-7 loss in Seattle. ... Right-hander Keone Kela was recalled from Triple-A Round Rock.

Athletics: Semien will undergo surgery Tuesday and will have another CT scan in six weeks to be re-evaluated. ... Bruce Maxwell was called up from Triple-A Nashville. . Sonny Gray threw 47 pitches over 2 2/3 innings during an outing in extended spring training.

Texas right-hander Yu Darvish (1-1) faces the A's for the second time this season on Tuesday while Oakland counters with right-hander Andrew Triggs (2-0). Darvish suffered his only loss this year against the A's on April 8.