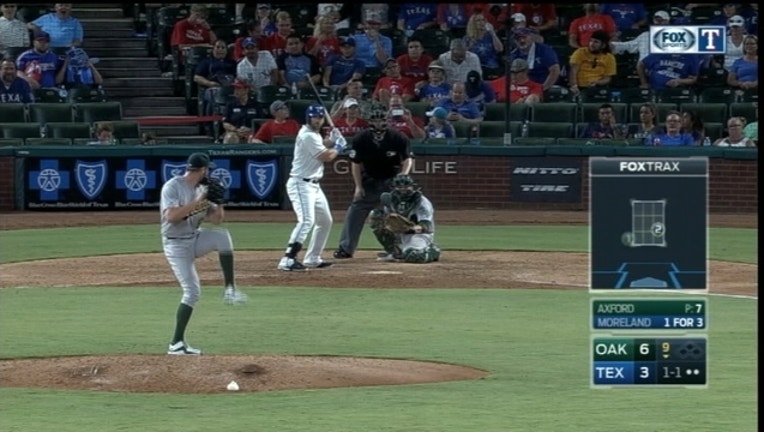 ARLINGTON, Texas (AP) — When Bob Melvin went to the mound in the fifth inning, he wasn't going to take Sonny Gray out of the game. The Oakland Athletics manager had a reminder with a pep talk.

"You've got to remind him who Sonny Gray is," Melvin said. "Sonny Gray is one of the best pitchers in the American League."

Gray, an All-Star last season but with a 5.49 ERA before Tuesday night, overcame that one volatile inning and had a season-high eight strikeouts as the A's beat the AL West-leading Texas Rangers 6-3.

The only hits Gray (5-9) allowed came to five consecutive batters to start the Rangers fifth, including deep opposite-field homers by Joey Gallo and Mitch Moreland. Gray had retired 12 of the first 13 batters before that and struck out the last two batters he faced to finish the sixth.

"The first four innings and even the sixth inning, that's the pitcher that I want to be and the pitcher that I've been my whole career, not only in the big leagues, but my whole life," Gray said. "I don't know what it's been this year. I can't explain just the one inning."

Josh Reddick drove in three runs for the A's, who won for the fourth time in five games. Reddick's two-run homer in the fourth was one of three homers by the A's. Coco Crisp and Marcus Semien also went deep.

Gray, who has won all six of his career starts at Texas, struck out all three batters in the first and had five Ks through two innings.

In the third, he had a nifty defensive play, bouncing off the mound toward the third-base line to field a high chopper. He made a backhanded catch and then an off-balance throw falling toward the line to get Robinson Chirinos out at first.

Crisp led off the fourth with his eighth homer of the season, and Reddick homered after Jed Lowrie's single. Semien's 21st homer started the fifth off Nick Martinez (1-3) before Reddick added a run-scoring single for a 5-0 lead.

The no-hit bid for Gray ended when Rougned Odor singled on the first pitch of the fifth, though he was easily thrown out trying to stretch a routine single to right into a double.

Gallo then homered, a 448-foot opposite-field blast over the A's bullpen in left-center. Ryan Rua singled before Moreland also went the opposite way over that bullpen, a 423-foot homer.

Martinez gave up five runs and six hits while pitching into the fifth after being recalled to start in place of Kyle Lohse, the 37-year-old right-hander designated for assignment with a 12.54 ERA after losing both of his Texas starts.

With Prince Fielder expected to have season-ending neck surgery, the Rangers recalled Gallo to give them a left-hander with potential power. Gallo hit six homers in 36 games last season in his MLB debut, but had just one at-bat this year for the Rangers before Tuesday night.

The start of the game was delayed 62 minutes because of rain. ... Gray has allowed 17 homers, matching his career high set last season. The right-hander had been 1-8 with a 6.45 ERA his previous 14 starts. ... Oakland C Stephen Vogt returned after missing three games while on family medical leave.

Athletics: LHP Rich Hill, who hasn't started since July 17 because of a persistent blister, hopes to return Sunday. He threw a bullpen session with tape over the blister Tuesday after playing catch with it uncovered.

Rangers: SS Elvis Andrus was out of the lineup for the second time in a nine-day stretch that also included an off day for the team. Banister said Andrus "was a little banged up" but would play Wednesday.

Athletics: Lefty Sean Manaea (3-5, 4.61 ERA) has allowed only two runs in 20 innings his last three starts — and the A's have scored only once while he was pitching in that span.

Rangers: Yu Darvish (2-2, 3.12) is winless in his two starts since returning from the disabled list, but the Rangers have scored only two runs total for him in those games. The right-hander struck out 11 in six innings at Kansas City last Friday.