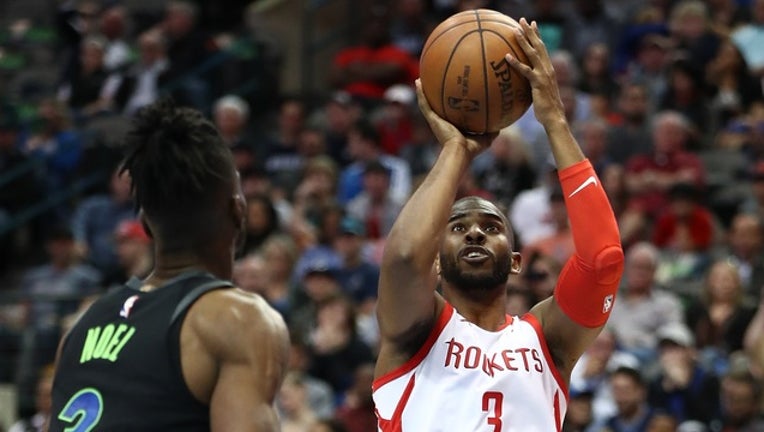 Chris Paul #3 of the Houston Rockets takes a shot against Nerlens Noel #3 of the Dallas Mavericks at American Airlines Center on March 11, 2018 in Dallas, Texas. (Photo by Ronald Martinez/Getty Images)

The Rockets rested Harden because of a sore left knee, but had plenty of 3-point shooting even without their MVP candidate.

Houston, which had its 17-game win streak snapped Friday in Toronto, broke the game open in the third quarter by hitting their first six 3s of the period amid a 22-10 run. The Rockets finished 17-for-45 from beyond the arc.

Paul either scored or assisted on the first 20 points of the quarter and finished the quarter with 12 points and five assists as Houston outscored Dallas 32-16.

The Rockets moved 1 ½ games ahead of Golden State for the best record in the NBA after the Warriors lost to Minnesota earlier Sunday. Houston also holds the tiebreaker on Golden State should the teams finish with identical records.

Houston swept the four-game season series from the Mavericks for the second year in a row. The Mavericks' last win over the Rockets came in the final week of the 2015-16 season.

Dwight Powell led the Mavericks with 20 points, one short of his career high, on 9-of-11 shooting. Harrison Barnes added 14.

Houston went on an early 14-0 run behind eight points from Gordon to go up 17-3. The Mavericks came back, taking their first lead at 38-37 on Smith's lay-up with 4:31 left in the second quarter.

Dallas led by six with two minutes left in the half, but the Rockets scored eight of the last nine points to go up 48-47 at the break.

Rockets: Coach Mike D'Antoni said Harden should be available Monday against San Antonio. The Rockets are 5-3 without him in the lineup. ... Houston used its 13th different starting lineup of the year. ... D'Antoni was on hand in nearby Frisco, Texas, to watch his alma mater Marshall, coached by his brother Dan, win the Conference USA Tournament final Saturday. The Thundering Herd beat Western Kentucky 67-66 for their first NCAA Tournament berth since 1987.

Mavericks: Barea assisted on nine of the Mavericks' first 10 field goals. ... Dallas signed F Jameel Warney to a 10-day contract. Warney has averaged 20 points in 40 games for the Mavericks' G-League affiliate, the Texas Legends. Warney entered in the fourth quarter and scored five points. ... Dorian Finney-Smith, who played Saturday after missing 51 with a quadriceps injury, sat out Sunday. Wesley Matthews and Salah Mejri also sat out for the Mavericks.

Rockets: Host the Spurs on Monday for the second half of a back-to-back.

Mavericks: Start a four-game road trip Tuesday at the Knicks. Dallas plays 10 of its final 15 on the road.