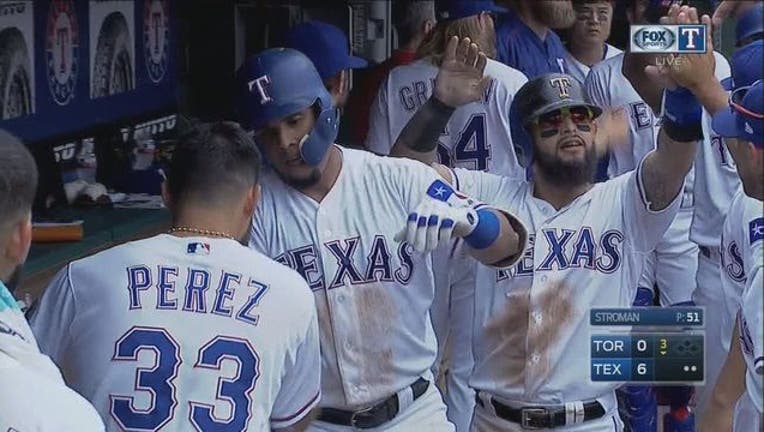 ARLINGTON, Texas (AP) - Carlos Gomez was munching on a doughnut and a piece of watermelon simultaneously before the game, when he predicted he would hit a home run.

Then there was the recording of a rooster call the Texas center fielder wanted played for one of his teammates.

Turns out things went even better than he planned.

Gomez went deep twice for a career high-matching five RBIs and the Rangers beat the Toronto Blue Jays 11-4 on Thursday for a split of the four-game series.

"I've been feeling really well at the plate the last couple of games, and I've been keeping up the good work," said Gomez, who has five homers in his six games since returning from the disabled list after missing a month with a right hamstring strain.

Mike Napoli and Robinson Chirinos also homered for the Rangers (36-36), won for the ninth time in 13 games to get back to .500 before playing 20 of their next 26 games on the road.

After his pregame snack, Gomez had sent a recording of a rooster call to the public address announcer, asking it to be played for Rangers slugger Joey Gallo, whose last name in Spanish translates to rooster.

Instead, the call got played when Gomez came to bat in the second inning and had a single.

"I want to put it up to make fun of him, so they confused it and put it on mine," Gomez said.

That rooster call got played again after Gomez hit a three-run shot in the third that ricocheted off the left-field foul pole and put Texas up 6-0. He added a two-run homer in the seventh.

The Blue Jays (35-37), who beat Texas in the AL Division Series each of the past two seasons, lost for the ninth straight time when they had a chance to reach .500 for the first time this season. They have been outscored 73-24 in those nine losses.

"It's been a battle trying to get back to that .500 mark. ... It seems we get knocked around pretty good on that day," Jays manager John Gibbons said. "If it was a team that never won big games and hadn't experienced it, I'd look at it differently. We just can't seem to give over that hump yet, and we will."

Martin Perez (4-6) went six innings, and all four runs he allowed came with two outs in the fifth. The lefty struck out three, walked two and hit a batter.

Marcus Stroman (7-4) matched a career high allowing seven runs over four innings, giving up three homers. The right-hander has lost consecutive starts after going 6-0 in his 10 games before that.

"The long ball hurt me," Stroman said. "Just didn't have a good feel of my sinker and all of the other pitches kind of played off of that. I'll make a few adjustments."

Adrian Beltre put the Rangers ahead to stay with an RBI double in the first. Beltre added another double in the seventh, his 2,962nd hit, one behind Sam Crawford for 33rd all-time. He had a sacrifice fly in the eighth for his 1,587th RBI.

The Rangers won four games during the seven-game homestand. They scored at least 10 runs in three of those wins. ... Chirinos, the No. 2 catcher, homered for the fourth time in his past seven starts. He also doubled twice. ... Shin-Soo Choo walked twice, making the eighth consecutive game he has reached base multiple times. He has reached base in 28 of 56 plate appearances his past 12 games.

Blue Jays: 3B Josh Donaldson was a late scratch from the lineup as the DH because of left knee soreness. ... LF Steve Pearce didn't play a day after bruising his right knee when crashing into the wall on Joey Gallo's inside-the-park home run.

Rangers: RHP Jeremy Jeffress (strained lower back muscle) was put on the 10-day DL, and RHP Preston Claiborne's contract was purchased from Triple-A Round Rock. Jeffress first felt something wrong when warming up before pitching Tuesday. "The next morning I couldn't get up out of bed," he said.