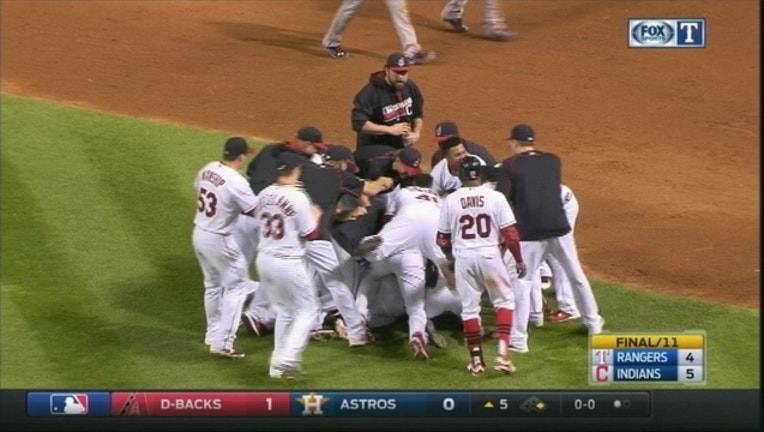 Alex Claudio (1-1) gave up Chisenhall's double over third base to start the inning. Gomes fouled off a bunt attempt on the first pitch, before bouncing his hit up the middle.

Chisnehall raced home and Gomes, who came into the game batting .171, was mobbed by his teammates after Cleveland's first walkoff win of the season.

Tom Gorzelanny (1-0), called up from the minors before the game, recorded the final out in the 11th and the Indians avoided a three-game sweep against the AL West leaders.

Juan Uribe's two-out single in the eighth broke a 3-all tie, but Texas rallied in the ninth off closer Cody Allen, who blew his first save in 12 chances this season.

The Indians took a 4-3 lead in the eighth. Jose Ramirez's two-out double started the rally. Uribe lined a hit to right and Ramirez slid across the plate to beat Ian Desmond's throw.

Mike Napoli hit a two-run homer in the first for Cleveland. Ryan Rua's one-out homer in the seventh tied the game, two innings after Jason Kipnis' RBI double broke a 2-all tie.

Andrus was 2 for 5 and has hit safely in 30 of 31 career games at Progressive Field.

Rangers: OF Shin-Soo Choo (strained left hamstring) will continue his rehab at extended spring training. He was previously out with a strained right calf and is on the 15-day disabled list for the second time this season

Indians: Team president Chris Antonetti said Byrd's suspension won't cause the team to rush the return of OF Michael Brantley (inflammation in right shoulder). Brantley is on the disabled list for the second time this season.

Rangers: RHP Yu Darvish will make his second start of the season Friday in the opener of a three-game series against Seattle. Darvish, who had been out because of elbow surgery, allowed one run in five innings Saturday against Pittsburgh.