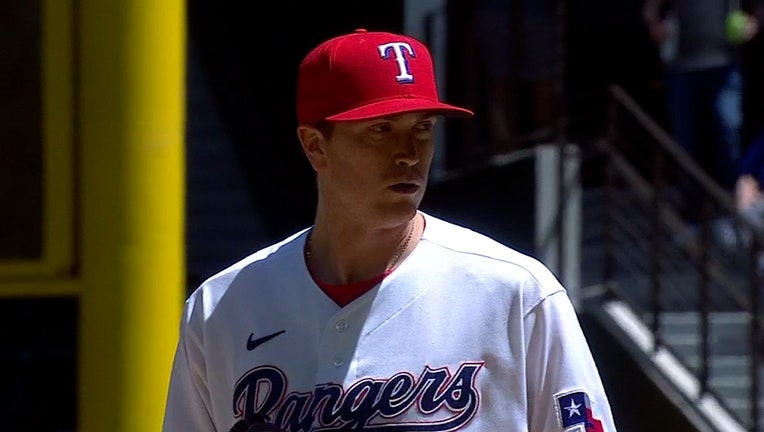 ARLINGTON, Texas - Kyle Gibson rebounded from a horrendous opening day start for Texas by striking out eight over six scoreless innings, and the Rangers beat the Toronto Blue Jays 2-1 in the rubber game of their three-game series Wednesday.

Gibson (1-0) scattered six hits with one walk while throwing 55 of 82 pitches for strikes.

"It was just nice for Gibby to get back out there and do what we expected with all of the work this guy has put in," manager Chris Woodward said. "He looked like the No. 1 today ... He kind of set the tone."

Six days earlier, in the first opening-day start for Gibson in his nine big league seasons, the Rangers led 5-0 at Kansas City before he had thrown his first pitch. But Gibson recorded only one out while facing eight batters and giving up five runs. It was the shortest opening day start in franchise history, the shortest in the majors since 1982 and the only time he failed he to get out of the first inning.

"He’s impressive, to see somebody pitch like that all of the time," Toronto manager Charlie Montoyo said. "He’s our ace, and he gave us a chance."

Marcus Semien hit his third homer for the Blue Jays, a leadoff shot in the eighth.

Ian Kennedy, the third Texas reliever, struck out three around a hit in the ninth for his second save, both in less than 24 hours. The 36-year-old right-hander went to spring training on a minor league deal with Texas, which then lost potential closers Jose Leclerc and Jonathan Hernandez to injuries.

Gibson got an out against the Blue Jays on Semien's flyball to left on the first pitch, and had five strikeouts the first time through the order. Toronto had the bases loaded with one out in the fifth after Semien walked before

"I don’t know that I really needed to do too much work in between the ears honestly," Gibson said about his thoughts since the opener. "As I looked back on it ... I ended up creating some of the damage that they did just by not having good command."

Woodward said he would chalk up the first game to "opening day weirdness," then added, "This is what we were expecting."

Solak led off the Rangers second with his first home run this season. Catcher Jose Trevino reached on an infield single later in the inning and scored when

Ryu has allowed only two runs in each of his two starts, with 12 strikeouts and only one walk, but the South Korean pitcher has gotten only three runs of support.

"Overall, it was a good outing," Ryu said through a translator. "I was able to make sure the hitters got soft contact, and that allowed me to throw seven innings."

Blue Jays: CF George Springer, who had hoped to make Blue Jays debut on Thursday, felt tightness in his right quad running bases. Springer started the season on the injured list with a strained left oblique muscle that gave him no issues during batting practice Tuesday before running the bases. ... C Danny Jansen was back in the lineup. He left the series opener Monday after taking a foul top off the inside of his right knee.

Rangers: 3B Brock Holt came out of Tuesday night's game late with right hamstring tightness, but already wasn't scheduled to start Wednesday against a left-handed pitcher.

Blue Jays: Become the first team in MLB history to play home openers in three different cities over three consecutive seasons. They host the Los Angeles Angels at their spring training home in Dunedin, Florida, after playing home games in Buffalo last season. Their last game in their home park in Toronto was before the pandemic in 2019.

Rangers: After a day off for the team Thursday, Japanese RHP Kohei Arihara (0-0, 5.40 ERA) makes his first home start for Texas in a series opener against the San Diego Padres on Friday night.