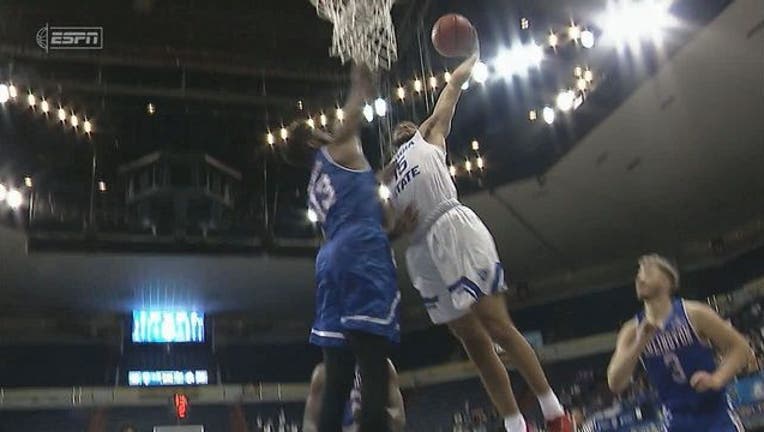 No. 2 seed Georgia State (24-10) will be making its fourth NCAA Tournament appearance and first since 2015. Fourth-seeded UT Arlington, which upset Sun Belt regular-season champion Louisiana-Lafayette in the semifinals, fell to 21-13.

The Panthers, who set school records for 3-point percentage and 3-pointers made this season, connected on 8 of 17 from beyond the arc. The Mavericks made 4 of 25 3-pointers and shot 29.8 percent (17 of 57) from the floor.

Simonds, the Sun Belt Player of the Year who set the Panthers' single-season scoring record during a semifinal victory against Georgia Southern on Saturday, was chosen the tournament's Most Outstanding Player.

Devin Mitchell added 13 points before fouling out, and Malik Benlevi scored 11 for GSU.

Johnny Hamilton led the Mavericks with 23 points and 14 rebounds, Erick Neal scored 12, Kevin Hervey had 11 and Kaelon Williams 10. Neal, who had averaged a tournament-best 27.5 points in the previous two games, made 2 of 15 shots, including 1 of 9 3-pointers.

GSU led by three at halftime, but UTA twice cut the lead to one early in the second half. Simonds scored four points during an 11-1 run that gave the Panthers a 46-35 lead.

After Hamilton made a free throw, Benlevi scored five points to start an 11-2 run that put the Panthers in command.

Simonds scored 10 points as GSU opened a 22-15 lead midway through the first half. Hevery made a 3-pointer for UTA before the Panthers scored eight consecutive points to take a 30-18 lead. Wilson's three-point play ended the run and Hervey and Neal each made a 3-pointer to get the Mavericks within 33-30 at halftime.

UTA: In its first appearance in the Sun Belt title game since joining the league in 2013-14, UTA fell short of what would have been its second trip to the NCAA Tournament.

UTA: Waits to hear whether a postseason tournament other than the NCAA will invite it.

GSU: Waits to hear its destination in the NCAA Tournament.