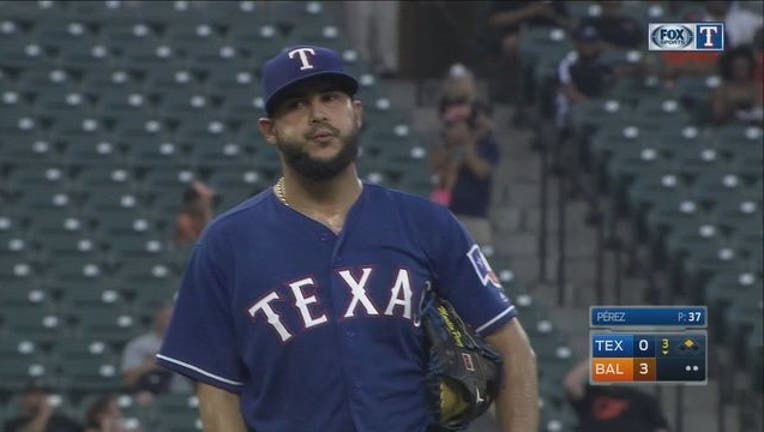 Having thus far outscored Texas 25-4 in the series, the Orioles will attempt to complete a four-game sweep on Thursday.

Gausman (6-7) gave up one run, struck out eight and walked two. The right-hander came in with a 6.39 ERA and had yielded a total of 14 runs in his last two starts.

Though the Orioles' faulty rotation is one big reason why the team is struggling to stay in contention, the starters in this series have combined to allow three runs over 18 innings.

Joey Gallo hit his 22nd home run for the Rangers, who have dropped four straight and scored only eight runs in their last five games.

Adrian Beltre hit a fourth-inning double to move within 17 hits of 3,000 for his career. It was his 602nd double, breaking a tie with Barry Bonds for 16th place on the all-time list.

But there were few other highlights for the Rangers, now 2-4 on a 10-game trip out of the All-Star break.

Jones got Baltimore started with a leadoff homer off Martin Perez (5-7), and Schoop made it 3-0 with a two-run double in the third.

Gallo connected in the fifth, but the Orioles pulled away in the seventh. Baltimore got six hits and took advantage of an error by catcher Robinson Chirinos to score four unearned runs.

Beltre played his 54th consecutive errorless game, the longest run of his career and a team record by a third baseman.

Buddy Bell and Hank Blalock both played 53 error-free games in a row at third base for Texas. Beltre was charged with an error after missing a line drive Tuesday, but the call was changed to a hit later in the game.

Rangers: RHP Keone Kela (sore shoulder) had a throwing session Wednesday and could be activated from the DL on Thursday. ... RHP A.J. Griffin (rib cage) allowed four runs and six hits in 3 1/3 innings in a rehabilitative start for Triple-A Round Rock on Wednesday.

Rangers: LHP Cole Hamels (4-0, 3.05 ERA) brings a 21-inning scoreless streak into the series finale Thursday night. He was out from May to late June with a right oblique strain.