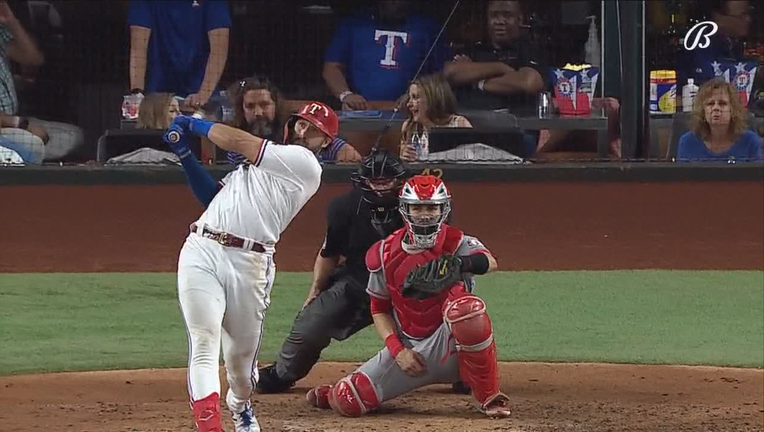 ARLINGTON, Texas - Joey Gallo circled the bases after the hardest hit of the season for the Texas slugger ended the longest home run drought of his career at 20 games.

"I forgot what to do, honestly," Gallo said. "I was running around the bases, I don't even know. Do I high-five people? I forgot all my signature moves."

Maybe he should teach a few to Nick Solak, who went deep twice to join a logjam for the AL lead in homers at seven. Gallo's two-run shot was the early tiebreaking blow in the Rangers' 6-1 win over the Los Angeles Angels on Tuesday night.

"He's got pop," Gallo said of Solak after the Rangers stopped a second four-game losing streak, their longest of the season. "It's good to see him finally using it and hitting it out of the ballpark."

Shohei Ohtani was 0 for 4 with a strikeout as the LA designated hitter a day after getting the win, scoring three runs and driving in two while becoming the first home run leader to start as a pitcher

Gallo extended the longest current on-base streak in the major leagues to 23 games with a first-inning walk. It's the deepest season-opening run for Texas since Ian Kinsler reached in the first 25 games of 2008.

"You could see the relief," manager Chris Woodward said. "You could see the kind of ... finally, not only an extra-base hit but a homer. I feel like he's done a really good job, even though he hasn't hit homers. It was really nice to get him some results."

Mike Trout, who entered the game leading the majors in on-base and slugging percentage, had was 2 for 4 with a double to raise his batting average to .431.

Ohtani and Trout didn't go deep against Texas starter Mike Foltynewicz, who had allowed a majors-leading eight home runs in his first four starts but didn't surrender one against the team that started the day leading the AL in long balls.

Foltynewicz (1-3) allowed eight hits and one run with four strikeouts in 5 1/3 innings for the right-hander's first win with the Rangers, six days after giving up three solo homers in six innings in a no-decision at the Angels. He signed as a free agent in the offseason.

"Against a lineup like this, back-to-back games, a little more chess match-type stuff out there," Foltynewicz said. "Just going out there and attacking guys and letting them hit the ball, getting back to where in my mind I'm not trying to strike everybody out."

Solak had a pair of solo shots in his first career multihomer game,

"They hit some balls hard," Angels manager Joe Maddon said. "The kid Solak's got some real raw strength and power. The pitch you'd like to have back is the pitch to Gallo. That was the one that kind of changed the momentum of the game."

Angels: Maddon said the blister on Ohtani's pitching hand that ended the right-hander's night after five innings wasn't a big concern. "We were just trying to stay ahead of it a little bit," Maddon said. "Just one of those things that we will have to continue to monitor it." ... Maddon said C Max Stassi (left thumb sprain) and OF Juan Lagares (left calf strain) were close to returning.

Gallo, whose only other extra-base hit was a homer in Kansas City in the second game, struck out with the bases loaded in the fourth. It was the 11th consecutive game with at least one K for the AL leader in walks (23) and strikeouts (34).

TROUT ON A ROLL

Since going 0 for 4 with three strikeouts in his first game against the Rangers on April 19, Trout is 11 of 17 with two homers, three doubles and four RBIs in four games.

Angels RHP Alex Cobb (1-1, 6.28 ERA) is set for Wednesday's finale of the three-game series against Texas RHP Dane Dunning (1-0, 3.06). Cobb has a 2.90 ERA in six career starts against the Rangers and is facing them for the first time since July 2018 with Baltimore. Dunning extended his scoreless streak to 16 innings in his previous start at the White Sox before allowing a career-high five earned runs without escaping the third. Dunning had a no-decision in Chicago's 9-7 victory.