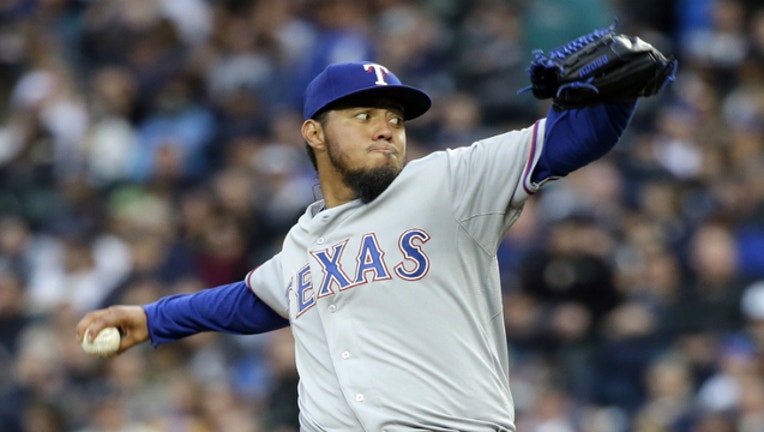 DETROIT (AP) — Yovani Gallardo took a shutout into the seventh inning, and the Texas Rangers spoiled Randy Wolf's return to the major leagues with a 5-3 victory over the Detroit Tigers on Saturday night.

Texas scored four runs in the third, when the Rangers hit five straight singles. That was enough support for Gallardo (10-9), who allowed eight hits in six-plus innings. The Tigers didn't score until Ian Kinsler's three-run homer with two outs in the ninth.

Wolf (0-1) allowed three earned runs and nine hits in seven innings, acquitting himself fairly well in his first major league start since June 2014. Wolf, who turned 39 on Saturday, was acquired by Detroit in a trade with Toronto on Thursday, as the Tigers tried to shore up a rotation that is missing injured starters Anibal Sanchez and Daniel Norris.

Rougned Odor hit a solo homer for Texas in the ninth.

With one out in the third, Delino DeShields, Shin-Soo Choo, Prince Fielder, Adrian Beltre and Mike Napoli all hit singles, giving the Rangers a 3-0 lead. Elvis Andrus then added an RBI groundout.

Texas pulled momentarily into a tie for the second wild card with the Los Angeles Angels, who were hosting Toronto.

Beltre had three hits for the Rangers. Miguel Cabrera had two for the Tigers, raising his average to .365.

The Tigers had at least one baserunner in each of the first seven innings but didn't score until the ninth, when Texas brought in closer Shawn Tolleson in a non-save situation. Kinsler greeted Tolleson with a homer to left, but Tyler Collins then struck out — with Cabrera on deck — to end the game.

Gallardo walked one and struck out four.

Rangers: With an off day Monday, Texas will skip LHP Martin Perez's turn in the rotation Wednesday in an effort to limit the 24-year-old's innings. Perez had elbow surgery last year.

Tigers: Sanchez is on the DL with a right rotator cuff strain. He said he's been working to get the inflammation out of the shoulder, and there is no set timetable yet for when he will resume throwing.