Leslie Adindu made the incredible journey from living in a Fort Worth homeless shelter to moving to Missouri to play college football on a full scholarship.

FORT WORTH, TX - In the darkness of your most uncertain time – where would your compass point?

Would you lose your direction?

Or find the will to stay on course?

Leslie Adindu’s compass led him from Nigeria to America.

To a football field and a chance – to clash with his most uncertain time and power through.

"It’s not what is in front of you it’s what you can do with it," says Adindu. "That’s just how I’ve been since I’ve been on this earth I guess."

"He’s got a drive to him where he doesn’t quit, regardless of the bad things that might happen to him," says Charles Perry, an assistant football coach at Fort Worth’s Arlington Heights High School.

"He just keeps on trudging along."

Leslie’s American story started in 2019, moving to Texas to live with his dad.

Leaving behind a life in Nigeria where he’d worked labor jobs since he was 10-years old.

A life where when his mom didn’t have the money to pay for school, he skipped the semester.

Leaving for a fantasy land.

"We used to think that it’s like heaven up here [in the United States]," said Adindu, cracking a smile as he details the way he used to imagine what American life would be like.

"I used to believe that money [grew] on a tree, that’s what I thought."

"Fortunately, God brought him into my PE class," recalls Perry.

Perry saw a raw kid with a ton of potential.

Playing junior varsity football during his junior year of school in 2019, Leslie’s ability was obvious to everyone but himself. 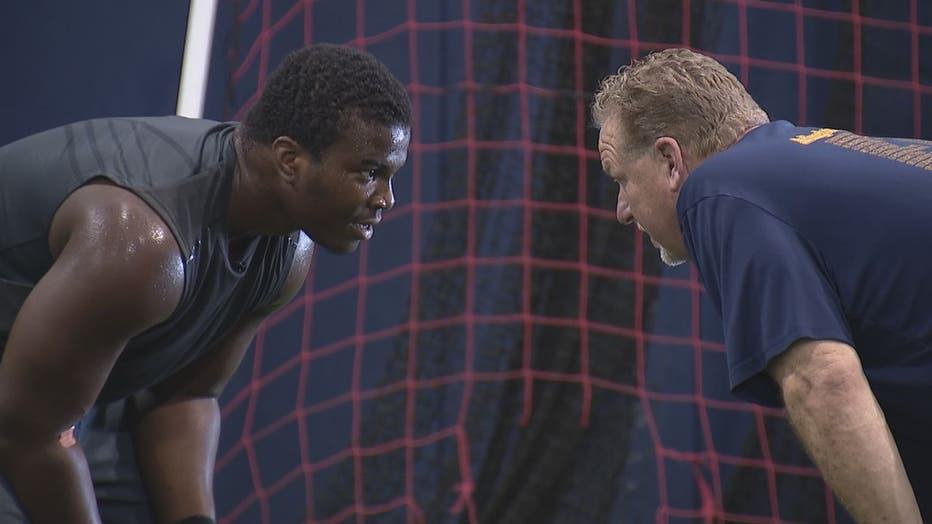 Leslie considers coach Charles Perry and the other coaches at Arlington Heights to be like father figures to him now.

Improving enough to play varsity as a senior gave Leslie direction, and in March of 2020, a reason not to quit on himself – when he lost his family and the apartment he was living in.

"[Football’s] just basically what kept me going," said Adindu. "Me and my dad we had a little conflict or what not. We had a little misunderstanding, so he moved out."

Soon, Leslie found himself needing a place to stay.

At the same time that his dad deserted him, the new COVID-19 pandemic kept Leslie separated from the Arlington Heights football team. For months, they had no idea where Adindu was.

"We couldn’t get a hold of Leslie, we didn’t know what happened to him," said Perry.

"We thought maybe he’d even gone back to Africa."

All the while, Leslie was still in Fort Worth – living at the Union Gospel Mission homeless shelter. It wasn’t until the summer that Leslie one day saw the football team was practicing, wound up reconnecting with the coaches and showed them where he was staying.

"I didn’t see it like I was homeless," says Adindu. "Just like one of those stages you’ve got to go through in life."

"He’s going through a situation a normal teenager doesn’t have to go through and face," said Perry. "He’s seen some traumatic things down there unfortunately. I knew he would."

"He’s seen people get killed, beaten to death, all kinds of stuff. Your heart goes out to a person that has to experience that."

As part of his responsibility at the shelter, Leslie had to hold a job. When school started back up, Adindu would work in the Union Gospel Mission kitchen at 3 a.m. so he could make it to football practice.

Heading into the school year, Leslie would unmercifully face a new obstacle – finding out he was two-and-a-half weeks too old to play UIL football.

Arlington Heights applied for a waiver but was denied, meaning Leslie would not get to play a varsity season after all.

Still, Coach Perry was convinced it wasn’t the end of the line for Leslie in football.

"I think there for a brief moment he thought about maybe quitting," said Perry. "But it wasn’t very long."

"I just used the football like a getaway," said Adindu. "Like a safe place where I can come, be around people, run around and stuff like that."

So, Adindu kept coming to practice.

He played in the scrimmages.

The coaching staff built the best highlight tape for him they could, with the 7 or 8 plays they had.

"For someone to come in senior year, with 7 or 8 film snaps to look at, and has never really played on a Friday night, to get recruited – that’s pretty big," said Perry.

In February, nearly a year after moving into a homeless shelter, Leslie signed a National Letter of Intent to play college football for Southwest Baptist University – a Division II program in Bolivar, MO – on a full scholarship.

"If it weren’t for the coaches, I probably wouldn’t be here," said Adindu.

"Here was a guy that went from absolutely nothing to, I mean, the world is in the palm of his hands," said Perry. 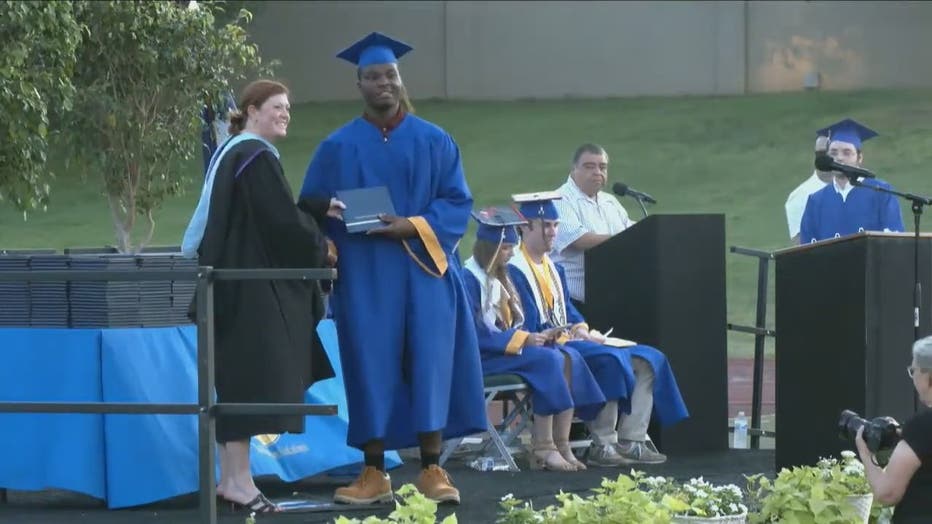 Leslie accepting his high school diploma during Arlington Heights' graduation in June. Two days later, he moved out of the Union Gospel Mission homeless shelter and up to his new home in Bolivar, MO.

In June, Adindu walked across the stage to accept his diploma at Arlington Heights’ graduation. Two days later, he moved out of the Union Gospel Mission homeless shelter and flew to Bolivar, MO, to move into his new home.

"That’s one of those [moments] you markup that you really like to see in your life," said Perry.

In his most uncertain time, Leslie Adindu would not allow the chaos to change the direction of his compass – refusing to let the place he slept at night define what he did each day.

"In my definition, I believe homelessness is like a concept of mind," says Adindu. "It depends on what you do with the situation."

What Adindu did with his situation was never lose hope, or take a shortcut.

He’s thankful for the people who cared for him at the Union Gospel Mission homeless shelter in Fort Worth. When members of the Arlington Heights’ community learned about his story and offered to take him into their homes, he chose to keep living at the shelter as an independent young man with a plan.

When the shelter offered him a private room, he decided to remain bunked up with the other shelter residents in the general quarters. Leslie didn’t want any special treatment.

Through a situation many people would have found crippling, Leslie Adindu never lost sight of the big life he plans to live.

"I’ve got my whole life set out," said Adindu, who feels he’s accomplished about 30-percent of his life goals so far. "I’ve just got to work at it a day at a time." 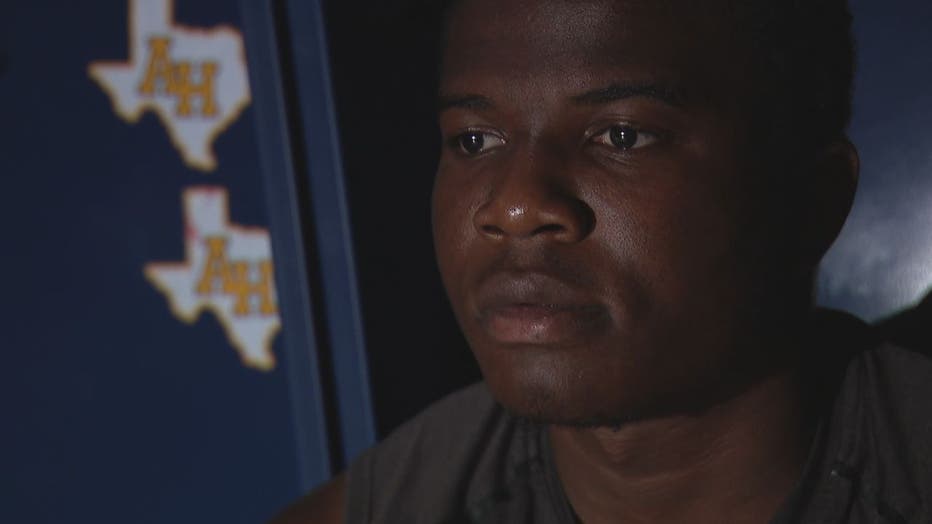 Leslie Adindu made the incredible journey from living in a Fort Worth homeless shelter to moving to Missouri to play college football on a full scholarship.