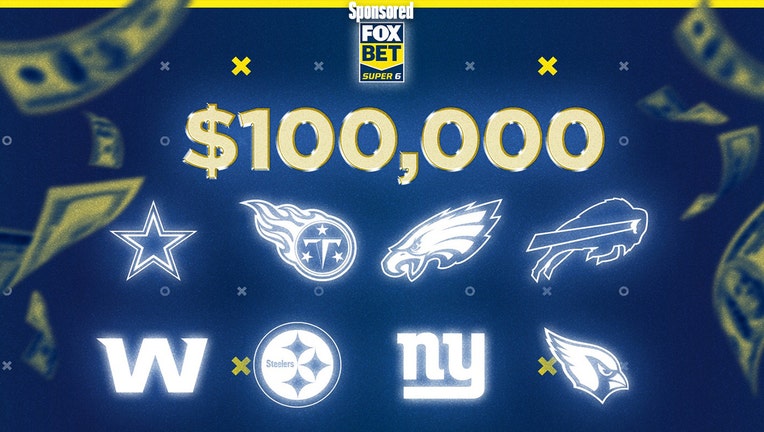 Friends, we are just a week away from you being able to win a house this holiday season with FOX Bet Super 6! But before we get there, you have another chance to cash in big with the NFL Week 15 Challenge on FOX Bet Super 6.

This week, FOX Bet is giving away $100,000 of Terry Bradshaw's money absolutely for free. All you have to do is download the FOX Bet Super 6 app, enter the NFL Sunday Challenge and make your picks on six games from Sunday's Week 15 slate. If you're right, you'll have a shot at the grand prize!

To help you get to the pay window, here are my thoughts on this week's FOX Bet Super 6 games.

We’ve been telling you the Cowboys have a flashing "Buy" sign for weeks, and that will continue in this game. It’s a nightmare matchup for the Giants, which is why the spread has drifted past double digits. New York QB Daniel Jones is unlikely to play (neck/spine) and might be shut down for the season. That leaves Mike Glennon, who was terribly unimpressive in a blowout loss to the Chargers. Worse yet, if the defense isn’t going to get pressure the QB, the secondary isn’t good enough to get stops. High-octane offenses such as the Cowboys (44 points, 7.0 yards per play), Rams (38 points, 5.5 ypp), Bucs (30 points, 5.3 ypp) have blown out the Giants.

The lone reason this could be close is injuries. The Cowboys will be without LT Tyron Smith (ankle), and their top two running backs (Ezekiel Elliott and Tony Pollard) are nursing injuries; their status is unknown. Instead, Dallas will win thanks to defense, something that hasn’t been said for years. Dallas held Washington to 29 yards in the first half Sunday. That helped them surge to a 27-0 lead. It only got close late after a Dak Prescott pick-6.

Pick: Cowboys to win by 7-9 points

The Bills have lost three of four and are in danger of missing the playoffs, but the antidote to that freefall is the moribund Carolina Panthers.

Carolina coach Matt Rhule’s seat is getting warm, and after firing his OC last week, the second-year coach decided to toggle between QBs Cam Newton and PJ Walker versus the Falcons. Not the smartest move — they combined for three turnovers in defeat. Rhule wants to run the ball, and maybe that works against the Bills, who have been run over by the Colts and Patriots in the last month. Problem is, the Bills have stomped bad teams at home, and the run defense rates highly against poor teams. They creamed Miami (26-11), the Texans (40-0) and Washington when the Football Team was bad (43-21).

Buffalo has no room for error here; the Panthers are coming off a loss that virtually knocked them out of playoff contention. Temperatures are expected in the high 20s or low 30s. The biggest injury of note is Josh Allen’s toe/foot, which left him in a walking boot after the Tampa game. Probably just precautionary, but if for some reason he doesn’t start in hopes he’s 100 percent for the Patriots rematch, the Bills get significantly downgraded.

This is a dangerous spot for the Cardinals. They're coming off of a home loss to the rival Ram, and now must get up on a short week for a trip to Detroit.

The Lions stink. The flu hit the Lions last week, and they were down half a dozen starters, resorted to calling up a RB from the practice squad to lead them in carries. Still, Arizona will be ripe for a letdown here, and the James Conner injury bears monitoring, especially with No. 2 RB Chase Edmonds also hurt. But at the same time for Detroit, you have to wonder if the front office insists on shutting down the team’s top offensive players — TJ Hockenson and D'Andre Swift missed the Denver loss — with the intended consequence of keeping pace with Houston and Jacksonville in the race for the No. 1 pick.

Even though Arizona has been tremendous on the road this season, winning at Tennessee, the Rams, Browns, 49ers, Seahawks and Bears, this is one of those sleepy December spots where they do just enough to win.

Pick: Cardinals to win by 3-4 points

*Pick made before WFT-Eagles game was postponed to Tuesday

Washington is coming off a body-bag game against Dallas in which they lost their starting QB (Taylor Heinicke, knee and elbow) and top receiver (Terry McLaurin, concussion). Washington had been hot during the four-game win streak, riding a ball-control run attack, but that didn’t work when they fell behind 27-0 versus Dallas. Washington was limited to just 29 yards in the first half. If Kyle Allen is the starter in place of Heinicke, he’s not your average third-string QB (Ryan Fitzpatrick was the starter at the beginning of the season), as he’s been with Ron Rivera and Scott Turner for a few years now, dating back to Carolina.

Philadelphia is the better team, coming off a bye, and has had two weeks to prepare for a divisional opponent. My only questions for the Eagles are the health of Jalen Hurts and how the Eagles handle Gardner Minshew, the backup who was flawless in a beatdown of the Jets. You have to wonder how Nick Sirianni reacts if Hurts comes out slowly and can’t make plays. Minshew is definitely the better passing QB; Hurts leads a diverse ground game that is finally healthy with Miles Sanders back from IR running behind a fully intact offensive line.

Quirky stat from the Titans' 20-0 win over the Jaguars: Tennessee had nine players catch a pass; none had over 50 yards receiving. They had five people run the ball; nobody had over 50 yards rushing. That offense-by-committee can work against the dregs of the league, but against Pittsburgh? That’s another story.

The Titans will need to find success on the ground versus a porous Steelers run defense that got torched for 200-plus yards by Dalvin Cook. That was largely without TJ Watt, who is a contender for DPOY, but suffered a groin injury. His injury status is the one to watch ahead of this game. Anytime he’s been out — for instance, the second half of the Raiders debacle — the Steelers defense (27th in efficiency) becomes extremely toothless.

But here's the kicker: Teams that are coming off a non-cover (Pittsburgh) versus a team coming off a cover (Tennessee) are hitting at 69 percent against the spread this season. That’s just one of the reasons I like Pittsburgh here. Mike Tomlin’s history as an underdog is impressive (43-22-2), and he pulled off the same feat a few weeks ago against Baltimore. In fact, the Steelers are 13-3-2 ATS as home underdogs under Tomlin.

Pick: Steelers to win by 3-4 points

John Harbaugh is saying all the right things about Lamar Jackson’s injury, and that he "expects" the star to play Sunday, but that might be gamesmanship. Backup QB Tyler Huntley is Lamar-lite, but with far less pocket awareness. He is 2-0 ATS in games he’s replaced Jackson so far this season, and nearly 2-0 straight-up, too.

Problem is, those games were against the Bears and Browns. Both are hopeless on offense; the Packers have scored 30-plus points three games in a row, and have an MVP contender in Aaron Rodgers. Now, Rodgers faces a defense that might be down its top three corners (Jimmy Smith didn’t play against Cleveland).

Justin Fields made plays with his legs and the Packers were confused last week; facing running QBs in back-to-back weeks is a big edge for what appears to be a reeling Green Bay defense. The Packers could get a boost if Jaire Alexander, one of the best CBs in the NFL, finally returns from injury.

The Ravens have a massive edge in special teams, led by kicker Justin Tucker, who has missed only two field goals all season (Mason Crosby of the Packers has missed nine). Green Bay is also beat up on the offensive line, as it finished SNF against Chicago with just one starter from the preseason depth chart, and that starter is a rookie. Baltimore will blitz early and often (third in blitz percentage), but will it have the offense to keep up with Rodgers?

Cowboys to win by 7-9 points

Cardinals to win by 3-4 points

Eagles to win by 6-7 points

Steelers to win by 3-4 points