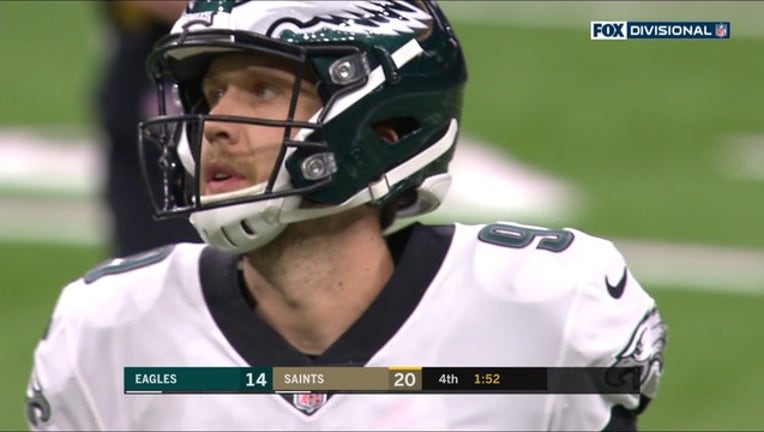 NEW ORLEANS (AP) - Nick Foles got the Philadelphia Eagles off to a fast start, only to be robbed of another fantastic finish by a veteran receiver's uncharacteristic drop.

"Football is a funny sport, especially playoff football. It's tough," Foles said after a tense 20-14 divisional playoff loss in New Orleans on Sunday. "We started the game off hot, battled the rest of the game and gave ourselves an opportunity to win at the end."

Indeed, Foles had the Eagles inside the Saints 30 with just less than two minutes left when his accurate slant pass bounced off of normally reliable receiver Alshon Jeffery's hands and fell into the arms of Saints cornerback Marshon Lattimore, virtually sealing Philadelphia's fate.

"I honestly felt at the bottom of my heart that when we walked out on the field, we'd been in that situation so many times that we were going to find a way to score a touchdown," said Eagles tight end Zach Ertz, whose 16-yard catch over the middle helped get Philadelphia's final drive rolling. "We were really close. That's how it's been all year. We've been extremely close a lot of times, and it just wasn't our year."

After all, Foles engineered late, go-ahead drives in the playoffs a week earlier and last season in the Super Bowl.

Time will tell if that was Foles' finale with Philadelphia. The Eagles might not be able to justify keeping him around as they continue to develop young franchise QB Carson Wentz.

They must decide by mid-February if they want to exercise a $20 million option to keep Foles - likely as a backup - for 2019.

But if this was it, Foles latest performance won't tarnish his Eagles legacy.

"We went out there and gave it everything we had tonight," said Foles, who finished 18 for 31 passing for 201 yards, one touchdown passing, one short rushing TD and two interceptions. "Everybody has to keep their head up high because that's what it's about. Sometimes you win and sometimes you lose. I don't have any regrets."

With his score on a keeper in the fourth quarter, Foles joined Pittsburgh QB Kordell Stewart and New York Jets running back Freeman McNeil as the only players in the Super Bowl era with at least one TD on a pass, catch and a run in their career playoff games.

"There's always throws you'd like to have back," Eagles coach Doug Peterson said. "But the way he hung in there and battled and gave our offense a chance to go down there and possibly win this football games, I thought overall he played pretty well."

Foles filled in memorably last season when Wentz had a knee injury and led the Eagles to their first NFL title since 1960, going 5-0 in games that he started and finished.

Foles returned to the starting lineup after a back injury sidelined Wentz last month and led the Eagles to four straight wins, including a 16-15 comeback victory at Chicago in the wild-card round.

Foles' uncanny knack for staying poised under pressure was no less evident in New Orleans than in his previous high-stakes triumphs. He largely mitigated the effects of the deafening din of the Superdome with his calm decisiveness. He was not sacked and made only one pivotal mistake - an underthrown downfield pass that intercepted by Lattimore as the Eagles were seeking to build on their early two-TD lead.

"I was trying to take a shot down the field and needed to get the ball another foot or so," Foles said. "Lattimore made a good play."

The Saints capitalized on that turnover with a long, gritty drive made it 14-7, and New Orleans methodically scored 13 more unanswered points to pull out their sixth straight home playoff victory since coach Sean Payton and QB Drew Brees joined forces in New Orleans in 2006.

Foles also could have used more time with the ball. The Saints dominated time of possession by nearly 33 minutes to 12 during the last three quarters.

"He's a good quarterback, man. He got the ball out quick. He did a good job of surveying the defense and trying to find out where to fit the ball in," Saints defensive tackle Tyeler Davison said. "He had good poise in the pocket. But at the end of the day, he can only do what he can do.

"Our game plan was to get after him, make him uncomfortable back there in the pocket and I feel like that worked."