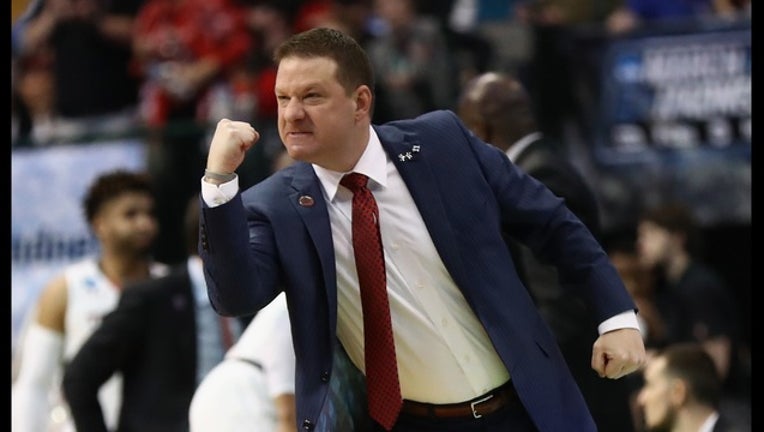 Head coach Chris Beard of Texas Tech reacts against Stephen F. Austin in the first round of the 2018 NCAA Men's Basketball Tournament at American Airlines Center on March 15, 2018 in Dallas, Texas. (Photo by Ronald Martinez/Getty Images)

BOTTOM LINE: Texas Tech beat instate opponent Stephen F. Austin 70-60 for its first NCAA Tournament win since 2005, when coach Chris Beard was an assistant under Bob Knight and the Red Raiders went to the Sweet 16. Florida knows a thing or two about the regional semifinals and beyond. The Gators, who eased past St. Bonaventure 77-62 to end the Bonnies' season two days after their first tournament win in 48 years, have reached the Elite Eight their past five NCAA trips.

HOME COOKING: Texas Tech fans filled the home of the NBA's Dallas Mavericks in the city with one of the West Texas school's biggest alumni bases. The advantage will likely be even more distinct against Florida, which had a sparse gathering for its first game about 1,000 miles from campus. The purple of SFA was dwarfed by the Red Raiders contingent, but those backing the Lumberjacks could still be heard.

GO-TO GUYS: There's little question Keenan Evans is the key to the Texas Tech offense, although he often waits until the second half to take over games. He had 19 of his 23 points after halftime against the Lumberjacks. It's a little harder to tell who might carry the load for the Gators. Egor Koulechov was the team's third leading scorer in the past three games with 20 against the Bonnies. Jalen Hudson had 20-point games in the last two of the regular season.

FAMILIAR FACE: Texas Tech guard Brandone Francis was a freshman at Florida for coach Mike White's first season in 2015-16. He transferred after playing in 29 games with two starts and sat out last season. Francis' breakout game for the Red Raiders was a 17-point showing in a win over West Virginia in the first-ever top 10 matchup in Lubbock. He's been in double figures just twice since, but had a critical 3-pointer for Tech's biggest lead to that point late against SFA.