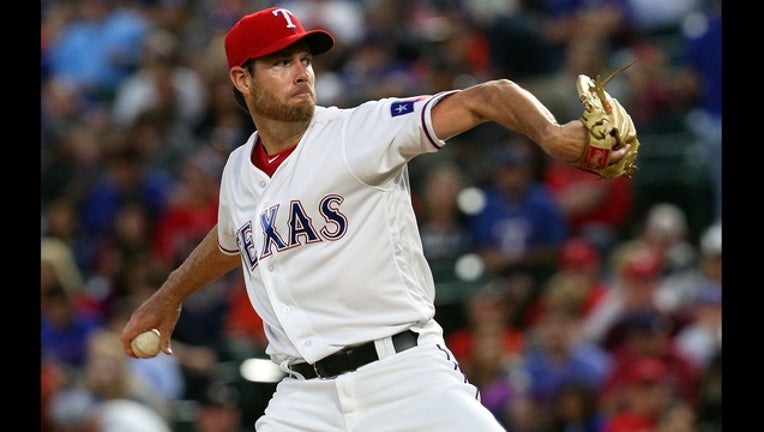 Doug Fister #38 of the Texas Rangers works the third inning of a baseball game against the Houston Astros at Globe Life Park in Arlington on March 30, 2018 in Arlington, Texas. (Photo by Richard Rodriguez/Getty Images)

The right-hander who pitched for the Astros in 2016, the year before they won their first World Series, allowed only Max Stassi's RBI double in the fifth in his new home ballpark, where he had an 8.73 ERA coming in.

Four relievers held the Astros to one hit over the final four innings, capped by Keone Kela pitching around a walk in the ninth.

Robinson Chirinos and Rougned Odor hit back-to-back sacrifice flies for a 3-0 lead in the fourth inning against 2015 AL Cy Young Award winner Dallas Keuchel. Chirinos' drive with the bases loaded was caught at the wall in right field by Josh Reddick.

Keuchel (0-1) allowed seven hits and three runs in six innings for the defending champs, who had a five-game winning streak against Texas after taking the season opener.

Fister (1-0) allowed four hits, struck out three and walked three. The 34-year-old was the first of 166 major league free agents to finalize a deal in the offseason after waiting until May last year.

Mazara, who had one homer in 123 at-bats against left-handers last season, went deep in his first lefty-lefty matchup this season. The solo liner just to the right of berm in center field came in the second inning. He walked and scored in the fourth.

After facing a four-man outfield in four hitless at-bats on opening day, Texas slugger Joey Gallo had two hits, including an RBI double off the top of the wall in center, against a more traditional shift.

Chris Martin and Alex Claudio each had a bases-loaded strikeout to preserve a 3-1 lead in a bizarre sixth inning. The Astros loaded the bases after Odor threw about 30 feet wide of first in the middle of turning around on a botched double-play attempt that didn't get anybody out.

Jose Altuve was initially allowed to score when Odor's throw went into the Texas dugout but was called back to third on review. An earlier review that Mazara trapped Altuve's liner was upheld even though the replay appeared to show Mazara bending to make the catch after running too far back.

Rangers: LHP Matt Moore makes his Texas debut in the same park where he beat the Rangers in the 2011 Division Series with Tampa Bay.