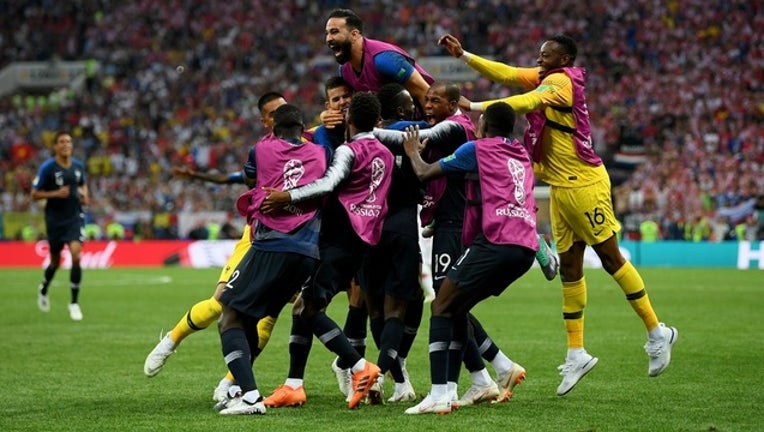 GENEVA (AP) - More than 3.5 billion people viewed some of the 2018 World Cup action, with 1.12 billion watching at least one minute of France beating Croatia 4-2 in the final, according to FIFA.

A FIFA-commissioned review of World Cup viewing published Friday said the television audience for the final was 516.6 million by the traditional measure of "global average in-home audience." More watched on digital devices and out-of-home screenings in public spaces, bars and restaurants.

Changing viewing habits - and no South American team in the final - help explain a drop from the 545-million average TV audience for the Germany-Argentina final in 2014.

In comparison, the 2016 European Championship final attracted a 284.4 million average audience for Portugal beating host France. The most-watched Super Bowl in the United States was 114.4 million when the New England Patriots beat the Seattle Seahawks in 2015.

FIFA said the global TV audience for the 64-match tournament in Russia averaged 191 million per game - up from 187 million for the 2014 edition in Brazil.

"Each game was a global televisual event in its own right," soccer's governing body said, citing research by Publicis Media Sport & Entertainment.

The 10 most watched games all had a verified average TV audience of more than 260 million viewers. The second-highest rating was 327.5 million for Croatia's semifinal win over England in extra time.

FIFA's research suggests most viewers also watched for longer than they did four years earlier.

The number of people watching at least 30 consecutive minutes of any game in their home was almost 2.5 billion - up more than 27 percent from the same measure in 2014.

South Americans were the most avid viewers despite watching fewer hours overall of a tournament where Brazil exited in the quarterfinals, and Argentina in the round of 16.

FIFA said 96.6 percent of South America's population saw at least one minute of any game. However, their 5.52 billion hours of total viewing fell 26.9 percent from the 2014 tournament where host Brazil placed fourth.

In Europe -which provided all four semifinalists in Russia - the 2018 World Cup reached 86 percent of people watching an average of 14.6 hours.

"In contrast only 38.4 percent of the Asian population were reached by World Cup coverage, reflecting relatively lower interest in the Indian subcontinent," FIFA said.

Still, almost 30 percent more viewing hours were measured in Asia, where games in Russia were played in time zones more convenient than in 2014.